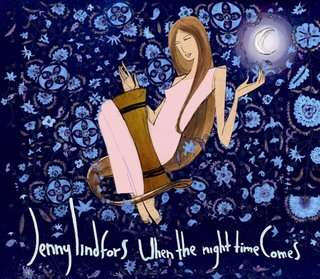 Review Snapshot:
The Dublin singer-songer's first full-length release delivers on the promise she has shown ever since her first EP and early gigs. Blissed-out melodic folk-pop that will sound fantastic on a warm summer evening. And even if it rains it'll still sound deadly too.

Full Review:
Back in 2004 your reviewer saw Jenny Lindfors play an impressive acoustic set in support of her then EP 'Carry Us Away'. Our very appreciative review of that show remarked how we were "really looking forward to hearing a full album of hers". Three years later, here's 'When The Night Time Comes' - and we haven't been disappointed.

The headliner on that acoustic night was Katell Keineg, and Lindfors shares with her a brand of catchy folk-pop whose melody, confidence and free spirit seem beyond the ability or comprehension of most male acoustic-bashers. Perhaps it's because all the guys worship the sweaty, tuneless, overrated Bob Dylan while the girls draw on the superior song writing craft of Joni Mitchell and Carole King. Just a theory.

'2 x 1' (pronounced "two multiplied by one") is the most charming and likeable Irish single in years, and it's a fair representation of the rest of the album. Cynics might sneer at the campfire vibe of 'Night Time' and 'Voodoo', all acoustic guitars and tom-toms, but this is an unapologetically feel good album.

Anyone looking for female singer-songer 'kookiness' à la Julie Feeney won't find it here. In songs like 'Lovestage' (a piano ballad) and 'Fearful Things' Lindfors sings about her life and love without ever coming across as self-obsessed or over serious. Refreshingly for an acoustic album, Lindfors writes like someone talking with her mates rather than to a psychiatrist.

Lindfors self-produces, and does a fine job at it - the vocal harmonies are sweet and never overdone, and the instrumentation is varied and layered without ever getting cluttered. Her voice is strong and engaging, emotive but controlled.

"When The Night Time Comes" is everything we could have hoped for in a debut album from the very talented Lindfors. We're really looking forward to hearing a second album of hers.