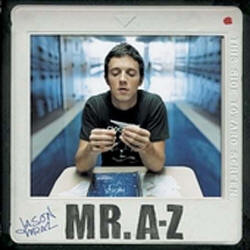 Review Snapshot:
You've heard mention of his name in dispatches from the States, and you'd like to know if this guy really is the next big thing. He isn't. Because you're really going to be interested in any record which can be reduced to 'Damien Rice meets Maroon 5', right?

Full Review:
If you're reading this on your laptop in Starbucks, there's a good chance you're listening to Jason Mraz right now. His is the type of low-fat, decaffeinated American college folk-pop you normally get to hear while sipping your long frappucino and skimming over your lecture notes, dude.

Anyone who has heard of people like John Mayer or Dave Matthews - and if you're European, that probably means 'none of you' - will know what to expect here; poetry-slam lyrics over bland no-risk verses and non-choruses. Though we're at a safe distance from James Blunt, we're not so far away from Maroon 5 or Semisonic (Dan Wilson of the latter group shares songwriting credits on the blue-eyed soul-pop of 'Did You Get My Message?' and 'Song For A Friend').

As a result, mixed in with the fragile-boho-artist attitude there's a suspicious whiff of '70s AOR about songs like 'Plane'. To listen to 'Mr A-Z' is like having Damien Rice tell you that he likes pina coladas and getting caught in the rain.

And if all that isn't naff enough for you, 'Please Don't Tell Her' evokes none other than Robbie Williams in his occasional grown-up-songwriting moods - it captures this record's naive philosophising, outdated rock stylings and overpolished production. On which point, Steve Lilywhite is the man at the faders, so if you're looking for subtle ambient layers or inventive arrangements you ought to be shopping elsewhere.

Meanwhile, the Clich? Lyrics Inspection Team have noted lyrics about 'learning to love yourself', a 'touch' that is inevitably missed 'so much' and the entire putting-yin/yang-opposites-together exercise (sample: 'It takes the cold to feel the sun') called 'Life Is Wonderful'.

Ignore whatever your friends in the US may have led you to believe - this is an unremarkable and unmemorable record which, regardless of any Stateside success, will be ignored the length and breadth of Europe.

Students with a J-1 visa for summer 2006 had better get used to it, though.