A review of his album 'The Great Western' 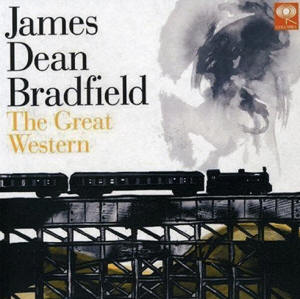 Review Snapshot: The debut solo effort from the Manics' main man arrives as the bands take a self-imposed break from recording. A departure from the mild electronic experimentation of 'Lifeblood', this is strictly post- Richey anthemic indie pop. With the amount of front men and women currently going it alone, it'll be a surprise if some go back to their day jobs?

Full Review:
'The Great Western', refers perhaps to the trip Bradfield undertook when travelling between his native Wales and his current home in London to write and record the album. This is a straight up, rock record that encompasses issues ranging from the public (guitar/synth combo of 'That's no way to tell a lie' concerning HIV and the church in Africa), to the personal ('An English Gentlemen', an ode to deceased manager Philip Hall).

Bradfield has spent over twenty years singing Nicky Wire's bourgeois-bashing lyrics and he seems to be enjoying the lack of role playing he must subject himself to in the Manics' lyrics. Although Wire's contribution of 'Bad boys and Painkillers' brings the awkwardness of fitting the music and melody around Wire's poetic phrasing and is clunkier than the other songs in terms of melodic flow.

Standout tracks such as 'Run Romeo Run', the Jacques Brel cover 'To see a friend in tears', '?igr? and the two aforementioned tracks establish Bradfield as a natural lyricist as well as musician; he sticks to the band's political polemic, albeit in a more subtle, less sloganeered style.

What attracts one's ears to this record is undoubtedly Bradfield's brilliant voice and ear for harmonising. The welsh twang is still there and this helps that great big dirty growl of his that works so well in a live context in bringing a crowd to life. Toned down numbers, such as 'Still a long way to go', equally display Bradfield's sibilant croon. There's plenty of 'sha la las' in the mix as most tracks are harnessed harmonically through the backing vocals, giving a hummable texture to the songs.

The comfort that Bradfield displays in singing his own lyrics seems almost as much a surprise for himself than for the listener; he is happy to slip out of his MSP skin and into his own for now. If the Manics ever give up the ghost there's a good chance that a new beginning for Bradfield could surface from the bands' demise. Perhaps with a little stretching of the imagination in terms of style, Bradfield could become a bonefied songwriter in his own right, but for now this album will do fine as a prologue for much more to come.

Check out the CLUAS review of the book 'Forever Delayed', a book of photographs of the Manic Street Preachers.