A review of their EP 'Falling On The Fears' 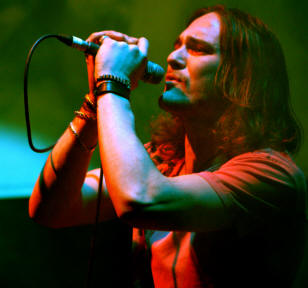 Review Snapshot:
This is an Ep of perennial energy that elicits comparisons with a number of established rock bands, but still makes you want to turn the volume way up.

Full review:
A small slice of kudos has to be rewarded to Dublin rock band Jaded Sun. For a long time, they have gigged extensively but never had a definite cutting edge to their sound. Now they do and this new EP is proof of that.

Despite many new bands borrowing heavily from their influences, there are few who still manage to leave a lasting impression on the listener. Jaded Sun has chose to mould their sound around John Maher's vocals. And it is his distinctive growl that gives the band an ability to yield the enduring impact that they strive for. Of course, the other band members contribute with effective jolts of instrumentation but Maher's singing will no doubt catch your attention straight away.

Disregard any similarities with other bands (Pearl Jam, Slash's Snakepit, The Black Crowes) that might come to mind, as the four songs on offer here hold enough punch to entertain again and again. The production work by Chris O'Brien and Graham Murphy is to be appreciated but it is the execution of the songs that will grab your attention for the eighteen-minute duration.

The opener 'Do It Again' is a stomping serenade that cuts three different structures into the song, allowing Maher to weave his vocals around the jutting guitar riffs. It starts as a howling clash of driving instruments before slipping down to a tempo where the backing vocals charmingly follow the lead singer's direction. Things then shoot to a rollicking height when each band member plays the rest of the song out at a reckless pace.

The rousing 'Blue Blood' feels like a Velvet Revolver tune with a steady drum beat assisting the snaring bass inserts. But what makes the song that bit more energetic is the commanding presence of Maher's vocals. From his opening scream of 'YEAH?C'mon', it feels like he is on a stage trying to pump the audience up. That raw ambience is only further elevated through the superb guitar playing of Sean Gosker and Eoran Stafford. It is a proper rock tune that perfectly sums up the liveliness of this Ep.

'Dorothy' slightly switches the arrangement as it starts slow and gathers stride throughout the five-minute stretch. At times it feels like the band's brave attempt at creating a Zeppelin-like story-in-a-song. But there is a digestible amount of chopping drums and wailing guitars to make the lyrical journey that bit more enjoyable. And just like the closing track 'Hold Me', which is much more prolonged than the rest, the key theme to the four songs is enthusiasm. It is the band's enthusiasm to deliver each tune with a pugnacious drive crossed with their enthusiasm for the songs themselves. This in turn transforms a simple four song Ep into something that is enjoyable and equally impressive.