The heartfelt simplicity and tender melodies of his singer-narrator role in 'There's Something About Mary' pretty much encapsulates the Jonathan Richman experience. His naive, earnest delivery and minimalist shuffle may not be to everyone's taste, but a full house at his Whelan's show earlier this year testifies to his enduring appeal to the alt-pop connoisseur. New album 'Not So Much To Be Loved As To Love' finds Richman continuing in the acoustic old-school rock n'roll style he has favoured since his creative renaissance in the 1990s. 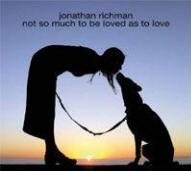 However, the mawkish title reveals much about this record's failings. Where previously he played the heartbroken romantic, Richman is now clearly happy with love and life and determined to share his enthusiasm. Crucially, this robs his songs of the despairing, melancholic undercurrent which electrified his mid-90s work. As far as making great pop music is concerned - and Richman has unquestionably made some fabulous records over the years - maybe it's better to have loved and lost. His relentless optimism in the title track and the throwaway 'My Baby Love Love Loves Me' (which irresistibly brings to mind Ralph Wiggum's 'you choo-choo-choose me') veers dangerously close to the sickly, overwrought innocence of the Langley Schools Project. Only his likeable breeziness, melodic expertise and quirky lyrics save this record from melting into a syrupy gloop.

Apart from his multilingual odes to love, the other songs are half-ideas and quarter-ideas with little innovation or distinctiveness. Anyone who was thrilled by the snarling proto-punk of his classic 'Pablo Picasso' are advised to approach with caution his two new tributes to painters - both 'Salvador Dali' and 'Vincent Van Gogh' (for it is they) are mildly diverting tunes with unremarkable lyrics about how much they affected our Jonathan.

Unlike the Picasso song (covered recently by fellow art-lover David Bowie), neither of these two songs capture anything of either artist's work or personality and are ultimately rather trite.

Most ominous of all is the concept of a Jonathan Richman political protest song. The cause in question is that of Abu Jamal, widely believed to have been wrongly jailed by the American courts. Richman's childlike writing and delivery are ill-suited to grown-up protest; frankly, the song is an embarrassment. Those who wish to follow up their tantalising glimpse of Richman's magic in '...Mary' should instead look for his fantastic 1998 record 'I'm So Confused' - a dark, nervy and troubled masterpiece - rather than this slight and disposable collection of bellybutton fluff.