A review of her album 'In Exile Deo'

There is a perception among some male music writers that a woman cannot play the guitar as well as a man but this doesn't explain the genius of a musician like Ms. Bonnie Raitt, who learned slide guitar from the great Willie Dixon and traded licks with none other than Mr. John Lee Hooker. There is also a perception abroad that women in general are not as accomplished as men when it comes to writing great tunes and, when they do, it is usually in partnership with a man (Sheryl Crow, Alanis Morissette, Madonna) but this is not correct either. Some of the world's greatest solo songwriters are female. Dolly Parton, Joni Mitchell, Suzanne Vega, Lucinda Williams, Cathy Dennis, Carole King, Stevie Nicks, Stephony Smith, Nancy Wilson, Gretchen Peters, k.d Lang, Joan Baez, Ricky Lee Jones and Emmylou Harris all have song writing chops that would put any of the guys to shame, as do Madge, Alanis and Sheryl. I personally don't share the perceptions of these other male writers so, whatever you may think about what I am about to say concerning Juliana Hatfield's eighth studio album 'In Exile Deo', please don't put it down to some kind of latent musical chauvinism on my part. 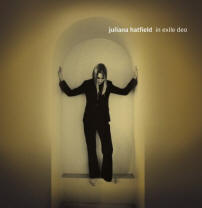 Juliana Hatfield first rose to prominence in the early 1990s when her song 'Spin the Bottle' from her major label debut album 'Become What You Are' was included on the soundtrack of the slacker comedy 'Reality Bites' (1994). The publicity that the song received helped to make the album a popular success and resulted in two US Billboard hit singles 'Spin the Bottle' and 'My Sister'. This was not a turn of events that Ms Hatfield welcomed since, as she says in her official website biography, "I was never comfortable with the attention. I thought it had come too soon.
I hadn't earned it yet." Ironically, she did not think that her record company appreciated her and complains about, "the almost universal misinterpretation of my intentions" which she perceived that they had of her work and adds that, "I sort of tried to play the game for a while in the mid-90's but I was disqualified because I wouldn't smile for the camera". To make matters worse, Hatfield was widely proclaimed as a guitar hero in such publications as Guitar World and Guitar Player, magazines which went to the trouble of transcribing her songs for their presumably old rock-and-roll boy's club readership. Her problem with this was that she had already concluded that, "I would never be accepted on equal terms in the rock-and-roll boy's club continuum".

Hmm, we are damned if we like you, damned if we don't. Hatfield concludes her ill-tempered, chip-on-the-shoulder, diatribe against all those people who bought her records by claiming that they tried to turn her into, "something I was not", when in her own eyes, "the goal has always been to just be myself". And what, I wonder, is that? A miserable, ungracious, aging, guitar wielding pop star whose hit making years are now behind her?

I thought 'In Exile Deo' was a decently structured, performed and produced set of songs but that lyrically and melodically it a little dull and, to borrow an acidly curt phrase from Tom Petty, I didn't hear a single. I appreciate Hatfield's sense of honesty and her desire "to maintain a sense of authentic self" but I don't think that such ambitions make for particularly great tunes. Nor do I see any merit in an artist banging on about doing things "on my own terms and in my own time" when they expect people to buy their albums and pay for concert tickets to their live shows. At some level, I think, the audience has a say in the music. Indeed, there is a wonderful Islamic saying which states that the gift of a singer is no greater than the gift of a listener to appreciate the singing. Hatfield has become one of those musicians who treat music simply as some kind of primal scream therapy and then bitches at her audience when they have the temerity to actually fork out hard earned cash to listen to that same music. I'm sorry to hear that her love life is not all that great but I don't see why she can't go and see a shrink instead.

The problems start on the album's opener 'Get In Line' where, over a throbbing three chord pattern, Hatfield begs her lover to, "Come on Baby / Kiss me / It really doesn't matter anyway / One more time / We're all gonna die someday". Yes, quite. Elsewhere on 'Dirty Dog' she sings, "You can steal my concept / And drink my wine / And break my shades / You can flip me over from behind / That would be alright". Well, to paraphrase Meatloaf, I would do anything for love but I won't do that.

If Hatfield had a stronger singing voice, all this self-hating analysis would have more edge but her vocals are a cross between Sheryl Crow's younger sister and Susanna Hoffs of The Bangles and despite her best attempts to show how in pain she is lyrically, Hatfield's record doesn't contain a single line that can match Dolly Parton's classic stanza "Oh, I know I'm a fool to keep stayin' / When you've made hurtin' me such an art / Tossed around like a used box of crayons / It's like a dagger through the heart". Furthermore, for a songwriter who places such importance on those lyrics, her delivery is indistinct and the words fail to punch through the clean sparse mix. Don't get me wrong. I rather enjoy feminine musical angst. It makes for great music. I am a big fan of Lucinda Williams, a songwriter of genius who can pen a line like, "Be my lover / Don't play no game / Just play me John Coltrane" and then sing it like she has been taken from behind once too often. Alanis Morissette, whatever you might think about her, is another towering talent who can take a line like "How 'bout them transparent dangling carrots / How 'bout that ever elusive kudo" and make the damn thing work. Hatfield doesn't have such reach and her song writing hasn't really developed since her time as a chart topping 'Girl with a Guitar' in the way that Carole King's broadened from writing the Aretha Franklin pop classic 'Natural Woman' to her own solo chart topper 'I Feel The Earth Move'. What once sounded spunky and fresh now sounds a little tired.

Hatfield also lacks the ability to capture the point of view of a character that is removed from her own immediate experience. On 'Singing in the Shower' she tells the story of a forty year old man who is facing up to a midlife crisis during his daily ablutions. Now, any woman who saw 'American Beauty' can tell you that if there is one thing a middle aged man is likely to do in the shower in the morning it is not to sing but, ahem, to cop one off.

Nor can I see why Hatfield is being categorised as Americana. Her lyrics lack a sense of place or cultural history, apart from a few passing references to 'Whippoorwill' and 'Neil Young on the radio', and her musical accompaniment is standard issue, one-two-three-four, rock drums, guitar and bass. There is no feeling that she is exploring America's vast hinterland within her sonic landscape. Of course, she might say that I am just another man misinterpreting her but then, at this stage in the game, maybe she should face up to the fact that she is not that great at communicating her intentions verbally in the first place and stop worrying about it altogether. Hey, that could be the name of a song, 'How I Learned to Stop Worrying about How Men Misinterpret Me and My Music and Started to Love My Audience'. Although, you would need Alanis to really sell the line properly.

The one area I can't fault is Hatfield's impeccable guitar playing which dominates the production of this album. Hatfield is credited on the linear notes as playing all guitars and she switches from electric to acoustic with aplomb, delivering short blistering solos over her own pre-laid rhythm guitar. If you want a reason to listen to this CD then the guitars are it. Hatfield's muse, whilst sounding thin and mean vocally, comes to life through her guitar. Her solo on 'Singing in the Shower' is a model lesson of economy and feeling, achieving the maximum impact through the minimum number of notes. To be fair, many wonderful guitarists such as Eric Clapton, JJ Cale and Kevin Shields have thin, reedy, unexceptional voices and Hatfield is no different. It is in the playing of her various instruments that Hatfield seems happiest. It is here that the self pity, self analysis, self hate and neurosis fall away and are replaced with a growling, squalling, strutting, and confident musical imagination. I only wish the songs were better in themselves.

Perhaps Hatfield might take a leaf out of Bonnie Raitt's book and record a set of songs by other artists which will allow her guitar playing to shine. Certainly she has, somewhere down the line, an exceptional guitar record within her on a level with 'Nick of Time'. 'In Exile Deo' isn't that album and, even if it was, I doubt that the popular success which Raitt has enjoyed from the 1990s on would make Hatfield happy. She's just not comfortable with the attention you see.