A review of their live album 'Rock in Rio' 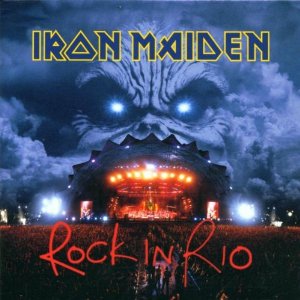 There's no shortage of previous live Maiden material so this latest one would want to be a Real Good One to have a reason for existence. Recorded at the "Rock In Rio" festival two years ago, where a quarter of a million metal maniacs gathered to hear all the classics from the denim metal giants' cannon played by a re-shaped six?man line?up. The show has been regarded as a Maiden best. Unleashing three lead guitars, the Maiden machine was overhauled and firing on familiarly powerful engines when the recorders were turned on in Rio.

Known for such powerful hits as 'Two Minutes to Midnight' and 'The Trooper', as well as the comically awful 'Bring Your Daughter to the Slaugther', Maiden has been one of the most influential bands in heavy metal. This live compilation catches the band twenty three years further down the road from their bad hair'n'leather coming together in middle England.

Janick Gers, Adrian Smith, and Dave Murray interact brilliantly to produce a mind melting take of "Two Minutes To Midnight." All the while, drummer Nicko McBrain and bassist Steve Harris thunder on louder and prouder than ever before. Iron Maiden has always been an underground attraction: although never having been taken very seriously in the U.S. they've had their show dutifully learned from by local metal-hard rock staples like Metallica and Marilyn Manson.

It's scary to count up the years, but Maiden was first formed back in 1976 by bassist Steve Harris, who had recruited rhythm guitarist Tony Parsons, drummer Doug Sampson and vocalist Paul Di'Anno when the time came to record the band's eponymous 1980 debut album. The hit of that release, Running Free, remains a live favourite, certainly among the Brazilian fans creating the serenade of screaming on this recording. Maiden's later material is more aggressive - the 1982 replacement of alcohol-addicted Di'Anno with vocalist Bruce Dickinson saw the band produce the hard and heavy Number Of The Beast. The title track of album and the almighty Hallowed By Thy Name, are played for all their rock-out glory on Rock in Rio. The surprise worldwide success of ...Beast made the band international rock superstars and Maiden stuck to that album's style for most of their career. The result is disappointing for fans of musical innovation but a bankable formula to success for Maiden, who never pretended to musical genius.

With their dark musical themes and the help of grim mascot "Eddie", Iron Maiden have built up a frightfully loyal legion of fans worldwide and have remained durably popular throughout their career. One of the first groups to be awarded the illustrious label "British Metal", Maiden have stayed the course better than fellow countrymen Black Sabbath and Led Zeppelin, who set the hard rock agenda for the "Made in Britain" heyday of the hard rock genre, the '80s.

The track listing here is an obvious one, a typical screaming, full-on Maiden night on the road. What we get is a fat slice of greatest hits fluffed out with the best of the band's latest record as well as a sprinkling of blacker sheep. So we've original frontman Bruce Dickinson back to sing mature versions of "Wrathchild," "The Trooper," "Iron Maiden," "The Number Of The Beast," "Sanctuary," "Hallowed Be Thy Name," and "Run To The Hills" while the Blaze Bayley era is represented by tracks like "Sign Of The Cross" and "The Clansman." The late 90s era Bayley songs fit surprisingly well with earlier material, considering how he and the band never functioned comfortably as a whole.

Iron Maiden have already established themselves as a powerful and unique metal band. This album showcases the best of Maiden as they amble over the hill of the group's collective career. It's reassuring, almost touching, to see Harris and Smith back where they belong and Maiden playing the music they're meant to make in the style the suits them. If you're a 'Maiden debutant, you'll be able to choose between the latest release and the classic 1980s live package, "Live After Death." Rock in Rio isn't an essential album but with its two disk loads of classic Iron Maiden live experience, it could rejuvenate lapsed appreciation of Iron Maiden, ever more a ...Real Live machine.