A review of their album 'Love And Distance' 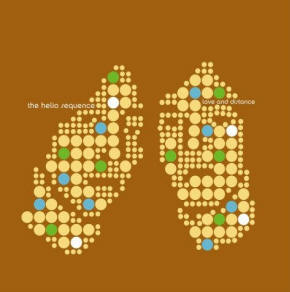 Review Snapshot:
Unremarkable tune-free, shoe-gazing album from a duo who should probably get out of the house a bit more.

Full review:
Just as Motown is indelibly associated with soul-pop and Trojan with reggae, Sub Pop is synonymous with idiosyncratic American alternative guitar bands. The Helio Sequence are right at home with their new label for this, their third album.

It was recorded in various basements and bedrooms of family and friends around their base of Portland, Oregon - a west-coast U.S. city whose bands (the most famous being The Dandy Warhols) regard themselves as avant-garde and hip. In truth, 'Love And Distance' is as safe and unadventurous as you would expect from any band who make a record in their parents' house.

To be fair, the band (a duo who include Modest Mouse drummer Benjamin Weikel) creates an impressive indie-wall-of-sound quite like 90's shoe-gazing bands such as Ride or a less squally My Bloody Valentine. Unfortunately, they also share those two groups' habit of forgetting to write songs - melodies, choruses, that kind of stuff. With all the obvious care that went into the arrangements, it's a shame that singer Brandon Summers can only offer inane, clich? rock-isms - lots of 'out of control' and disorientation, so if he ever offers you a lift just refuse politely and go for the bus instead.

That the opening track features a brief and unremarkable harmonica refrain and is called 'Harmonica Song' should give you an idea of the limited imagination on display throughout the rest of the album. And all of the tracks have one-minute intros and are at least another minute too long.

If ever there was a studio-bound record born of jamming rather than songwriting, then it's this one. Fans of bands like The Tragically Hip or Guided By Voices might be interested in this group's well-crafted alt-rock soundscape, which artfully evokes the sense of distance referred to in the album title. However, anyone who isn't already immersed in the Sub Pop ethos won't be won over by this record's complete lack of personality or memorable tunes.