A review of their album 'Once Bitten, Twice Live' 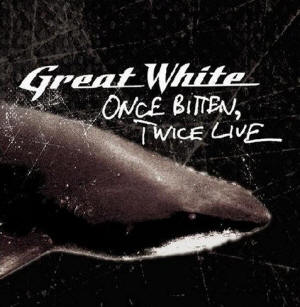 Review Snapshot:
The stale smell of fish is usually something I stick my nose up at, unfortunately it doesn't look as if it'll be any different with this latest catch from American rockers 'Great White'. It turns out that this release is actually a butchered and mixed version of a live album released two years ago with a different title...

Full Review:
More known today for the tragic Rhode Island nightclub fire in 2003 that claimed the lives of 96 fans and the bands Guitarist Ty Longley, Great White's name hasn't been helped by the impending legal battle that followed. To make matters worse, the band has had little added to their trophy cabinet since 1988's hit single Once Bitten, Twice Shy? and have been thrown around several labels in the past decade.

This album, their first release on Sidewinder who are also responsible for the VH1 Metal Mania Stripped DVD, is a rather interesting re-release of a live album recorded and released no less than two years ago on Mausoleum under the title Thank You?Goodnight! The whole thing indeed sounds rather fishy, no pun intended, considering the band have played only a handful of shows since then. As if they've tried to conceal that fact, the whole album has been cut, butchered and mixed, sounding as dodgy as those CD-Rs your 'mate's friend' used to burn in the schoolyard.

Desert Rose gets a good airing, while Save Your Love literally saves the band and proves they can 'talk the talk' when it comes to playing acoustic. But it's not all cockles and mussels, as some of these oysters have turned very sour indeed, the band finishing with an encore of Once Bitten, Twice Shy like they really had any choice in the matter.

With the band's last studio effort, 2004's Revisiting Familiar Waters, turning virtually no heads, this label change is perhaps a positive step towards the future, something the band feel they must do to avoid the icy depths of the deep blue sea.