A review of her album 'Supernature' 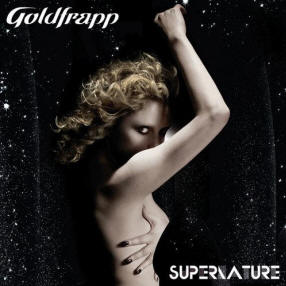 Review Snapshot: Electro-sleaze, the sub genre procreated by Goldfrapp. It slinks into your mind and teases you like a sexual fantasy come true, except all that you're getting is the soundtrack and nothing more. Trouble is we aren't getting anything else from their third album.

Full Review:
'Supernature' brings the idea first kindled in previous album 'Black Cherry' and drags it into poppier zones. Notwithstanding these zones are still rampant with bass lines that are beyond basic grooves welded with the shiniest of synths and vocals as smooth as a baby's you know what. It all oozes from your speakers like liquid cool. Something new this ain't.

Alas it seems most artists who have some reasonable success these days are afraid of straying from what got them noticed in the first place. That said this is still a decent listen, though musically it can became dreary and cold but that could be due to a recent electronic overdose on my part. But more people are listening this time around. This is an album has already fared well chart wise, as has its first single 'Ooh La La', which has a strut straight from Marc Bolan's book of Rock n' Roll Swagger. You can even see the bass guitar being swung back and forth in the video.

Alison's vocals have an attractive carelessness about them as if she were singing while concentrating on sounding sexy as opposed to actually singing the lyrics, but there's nothing as exciting though as 'Train' or 'Twist' on her previous album. Supernature simply doesn't get the blood pumping or your heart beating in synch with the fuzzy bass as 'Black Cherry' did. This may as well be the sequel, but it is an unequal one.

Yes, there are still good songs, 'Lovely 2 C U' and 'Ride A White Horse' being the early stand outs, but it quickly descends into homogeneous chillout for the rest of the record until 'Satin Chic' which repeats the Bolanesque shoulder shrugging and 'na nas'. Lyrically the sexual innuendo is still there but that works to their advantage.

There's nothing necessarily wrong with this album. It sounds great and the production is as shiny as Goldrapp's lip gloss. But sonically this album may as well have been recorded two years ago with Black Cherry; there doesn't seem to be much to discern between both. Except that Black Cherry was not only the sexier of the two but it had the better songs.