A review of the album 'Black Cherry' 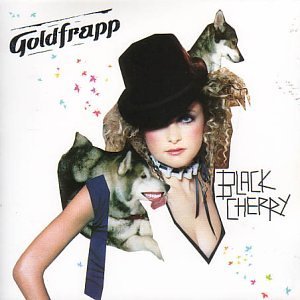 Right now there's an appropriately doleful XTC line running through my head: 'the disappointed / all come around to my house'. 'Betcha when they do they listen to 'Black Cherry', Goldfrapp's second release. It is an album whose status in turkey terms is put in awful relief by 'Felt Mountain', their debut, which even now is destined to be one of the best album of the noughties or any other time. With 'Felt Mountain' Goldfrapp created a lounge classic beloved of lovers and lushes. Dig 'Utopia', 'Felt Mountain's killer cut, it makes the dark arts of eugenics sound interesting, even romantic. Midway through its dense warmth Alison Goldfrapp druggily croons 'Fascist bayeeeebee', and you can only love her for it.

Goldfrapp created more genuinely odd but blissfully beautiful moments on 'Felt Mountain' than most bands could create in a lifetime. And then they have to spoil it all by blazing down the musical equivalent of the Fools Highway: the dreaded 'Change In Direction'; and the primary symptom of that awful condition: the 'Difficult Second Album Syndrome'. The drastic change in approach is too wilful, too knowing and far too dramatic. It covers all points too, whereas 'Felt Mountain's sleeve depicted some kind of Wagnerian alpine heaven 'Black Cherry's sleeve and artwork are shoddy than spikey, with Alison dolled up à la Jodie Foster in 'Taxi Driver'.

In strictly aural terms 'Felt Mountain' was wrapped in strings and romance but the unloveable 'Black Cherry' is decked out in flak jacket synths and mid 70s clumpy rhythm tracks. Felt Mountains lyrics were oddly alluring whereas Black Cherry's are simply odd. Worst of all, Alison Goldfrapp's voice, her strongest suit, is very poorly used: her vocals are synthetically treated and very badly produced - just listen to the album's title track, 'Black Cherry' which comes across all John Lennon circa 1972, but we'll let that pass.

As it evolves it shows some good moves, maybe even betraying a touch of tenderness but this impression is destroyed when Alison's silvery voice is used as a really dodgy keyboard sample. 'Train' 'Crystalline Green' and 'Twist' are appallingly crap glam, 'Slippage', the closer, could be retitled 'Sedative' and as for the sexual imagery that is 'Hairy Trees'?

I hope against hope that Goldfrapp will regroup, write some killer melodies and make us love them again but with 'Black Cherry' they've created the first major let down of 2003.

Check out a review of Goldfrapp live in Dublin in February 2001.