A review of their album 'Thunder, lightning strike' 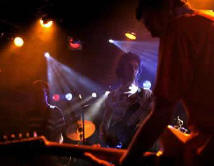 Review Snapshot:
Six piece Go! Team record their material in basements and bedrooms. They play theme tunes for programmes made in TV heaven using two drummers, rap, tasty scratching, lotsa loud guitars, great brass and woodwind, and some perfect sampling. The production is lo-fi but the tunes and playing are impeccable. A must buy.

Full review:
Timing is everything - suspend reality for a moment and let's suppose that by the end of 1978 the "Kojak" detective series has finally run its course and work on a new project, "Crocker", is underway.

Lt. Crocker is played by housewife's favourite Kevin Dobson of the original Kojak series. Dobson has an easy acting style, the storyboards are coming together well and the new series looks promising. There is however a major problem with the show's theme music but salvation arrives in the form of Go! Team's "Panther Dash" - from its opening false start guitar chop to its last note this short sharp aural burst is wrapped in a blizzard of treble, with a squall of distorted scrubby guitars, screeching feedback, and some keening harmonica.

As time moves on more work comes Go! Team's way - Starsky and Hutch's Huggy Bear sets his sights on a gritty spin off series of his own. His producers use Go! Team's "Bottle Rocket" - with its Philly horns, and its use of rap cheerleaders brilliantly evoking the the pimp rolls, the mean streets and the dirty drills which form the basis of this series.

When Huggy's wooing the ladies in the obligatory Pink Cadillac Go! Team's "Ladyflash" is generally playing on his eight track - Why? Because it's summer romance set to music, it's soulful, and it's sexy.

Moving to the early eighties, Go! Team's "Junior kick start" is the perfect musical introduction to a TV bikers' magazine aimed at teens while "Friendship Update" is taken up and used to front up their follow up to "Whatever happened to the likely lads?" With its faux "Young Americans" intro, trademark Go! Team twin drummers, a melancholic organ lead and its perfect brass arrangements, the music fits the laughter and the laughter makes the music seem even more bitter sweet.

Best of all, back over stateside, the new "Waltons" series features Go! Team's "Everyone's a VIP to someone" as its musical signature. Featuring a banjoed introduction, down home harmonica and woozy strings, this is music that oozes easy charm and is both loud but lovely, tough but tender.

You know of course that these TV programmes, fanciful as they were, never hit the streets but "Thunder, Lightning Strike", Go! Team's brilliant debut album, most certainly has. In the same way that Orbital made soundtracks for movies that never existed Go! Team make theme tunes for TV programmes that never were. Making perfect use of string and rap samples, churning feedback, clumpy rhythm tracks and absolutely gorgeous harmonica played by band front man Ian Parton, Go! Team's debut is one the best conceived, scaldingly energetic and most genuinely innovative albums of 2004.