A review of the album 'Universal Truths And Cycles' 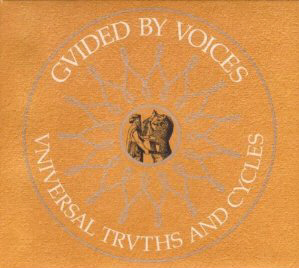 Bob Pollard has released - in the form of a new Guided By Voices CD - the latest batch of incredible songs he probably tossed off on a cocktail napkin in three hours. He is so prolific, what with GBV releases, his solo albums, a side project with Mac McCaughan of Superchunk, and his Fading Captain series of limited-edition releases, that it would be impossible for anyone but a thoroughly committed, obsessed fan (with a good deal of disposable income) to keep up with all of it. I like to listen to music by other artists besides Pollard, so I have to be content with merely keeping up with his flagship band.

Their latest CD, 'Universal Truths And Cycles,' seems designed to appease older Guided By Voices fans, who remember the band's early 4-track, lo-fi recordings with fondness and have not been happy about the newer, 'arena rock' incarnation of the band. This is not to say that 'UTAC' is lo-fi, exactly, but with its nineteen tracks the album is certainly a sprawling mess (in GBV World, this is a Good Thing). It is more reminiscent of 1996's transitional 'Under The Bushes Under The Stars' than of the band's more recent releases, 2001's 'Isolation Drills' and 1999's 'Do The Collapse,' which were conventionally-structured, straightforward pop albums, with a good deal of hi-gloss modern production.

It is not as immediately contagious and accessible as 'Isolation Drills', and if you're a fan of that record you might find that you'll have to mine this one a little harder to unearth its gems. It's worth the effort. Try setting your CD player on 'shuffle' and let 'Universal Truths And Cycles' surprise you.