A review of the album 'Isolation Drills' 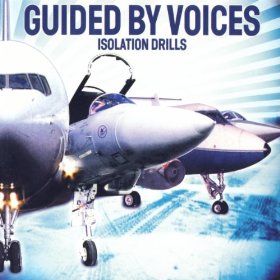 Bob Pollard has got to be the greatest impersonator in pop. At various moments, on his solo albums and with Guided by Voices, Pollard can make his voice and band sound like the Beatles (of course), The Who, Peter Gabriel-era Genesis, Alex Chilton/Big Star, the Stones, R.E.M., the Replacements, Cheap Trick, and a list of other classic rock greats longer than your arm.

Nowadays many indie die-hards who genuflect in the Church of Lo-Fi like to accuse Pollard of apostasy. They say that he has sold out, that he has abandoned his principles along with his 4-track recorder, that the band is not Guided by Voices anymore now that Tobin Sprout has left, and blah blah blah. That may be, but it's still Bob Pollard, and that ought to be enough for you, buster! That indie fans can malign someone like Pollard, who regularly sends them big bouquets of flowers in the form of albums chock full of anachronistic pop gems in what is today a truly dire musical landscape of dueling teen soda-pop queens and thug-rock idiocy, reinforces my opinion that there is no limit to the stubborn, self-defeating, hipper-than-thou stupidity within the realm of indie-rock dorkdom (I'm talking to YOU, all you balding, leather-jacketed ectomorphs I see at the shows).

No doubt the lo-fi partisans will be out in force once again, publicly trampling and burning copies of GBV's latest release, Isolation Drills. Get your Zippos ready, boys, because this recording is in STEREO (ask your hippie uncle about it, it's been around since at least 1965). This time GBV have used producer Rob Schnapf, who's worked with Elliott Smith and the Foo Fighters (Smith appears on one track, "Skills Like This.") This is a wiser choice than Ric Ocasek, who produced the last GBV album 'Do The Collapse'. My problem with Collapse wasn't that it was professionally recorded. It's fun to play spot-the-influence when listening to GBV, but Ocasek made the entire CD sound like nothing more than the Ocasek-produced Weezer, an annoying distraction. Schnapf keeps things in more familiar GBV territory. One thing that should please older fans about 'Isolation Drills' is that Pollard has reverted to including acoustic ditties ("Frostman," "Sister I Need Wine") that effectively function as between-song interludes. There's also nothing as cloying as "Hold On Hope" on 'Do the Collapse' which I still suspect was Pollard's attempt at penning his own "Everybody Hurts."

The record kicks off with "Fair Touching," with its Chronic Town-ish drum fills and chord progressions. From here on in it's a regular smorgasbord of pop-rock sounds and styles. "Skills Like This" and "Glad Girls" sound so eerily like Big Star you'll swear they're long-lost 'Sister Lovers' outtakes. "Run Wild" starts out creeping, then bludgeons you with power chords. "Twilight Campfighter" is wistful, wonderful, and flat-out gorgeous. The obvious single here (if this were the sort of band that got airplay) is "Chasing Heather Crazy," with its irresistible chorus and stop-start pacing. And check out Bob channeling Michael Stipe in "Fine To See You."

GBV songs are delightfully simple and intuitive. This is not one of those records about which I have to tell people, "Well, it takes a few listens..." No, with GBV you only have to hear the songs once and they get under your skin, where they immediately burrow, lay eggs, itch like crazy, and then take over your whole nervous system. This is pop music, folks. In bygone days, half of these songs would have been summertime radio hits, but, alas, we live in a wholly different universe now. Overall I give 'Isolation Drills' four out of five stars. I want to give it four and a half, but the songs seemed a tiny bit lackluster at first. Perhaps I haven't had enough time to let the album become part of my mental furniture (I haven't played it in the car yet, my real litmus test), or perhaps its just that Pollard releases so many hook-filled songs that I'm allowing myself to get a tiny bit jaded by his seemingly inexhaustible supply of them ("Another batch, eh Bob? Okay, put it with the rest.") Anyway the emphasis here is on "four stars."

Do pick up a copy of Isolation Drills. It's all meat, no filler - how many Guided by Voices records can you say THAT about?