A review of his album 'Power of the Blues' 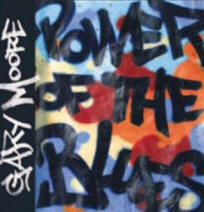 Review Snapshot:
Not for those looking for a new or progressive sound, but a great tension relieving album. Each song is electrified and electrifying blues that screams Lizzy-era rock, and is infused with Gary Moore's characteristic high-pitched soloing. Advice: play loud and play along.

Full review:
Although working solo since 1979, Gary Moore's popularity never really took off without the help of his friend Phil Lynott. Attempts at performing his own vocals on his records just never seemed to deliver. Maybe a bit desperately he tried in the 1980s to commercialise his music when he moved towards more slickly produced rock.

However in 1990, Gary went back to what he was best at and produced 'Still Got the Blues', a soulful collection of blues classics and originals. Since then his brand of blues has been consistently successful, and this album will only continue that trend.

Gary Moore cited this new release as his "most raw album yet", and sure enough you could get some serious friction burns from its rough edges, in comparison to the previous far-too-slick studio production of other albums at least. Gone too are the falsified and affected Irishisms of records like 'Wild Frontier' and 'After the War'.

The album gets off to a (dare I say it?) powerful start with the title track, complete with addictive tempo changes that you just can't help but rock along to. This gives way to surprisingly emotional 'There's a Hole', in which Gary proves that these songs just wouldn't work without the emotive voice of their writer.

'Tell Me Woman' arouses much suspicion however by sounding almost identical to the Peter Green's era Fleetwood Mac classic 'Looking for Somebody'. Gary Moore has already pledged his devotion as a fan to Peter Green in the album 'Blues for Greeny', but there is a fine line between homage to a hero and blatant plagiarism. Rehashing old lines seems an unfortunate feature of this album. 'That's Why I Play the Blues' carries more than just an echo of 1992's more up-tempo 'Cold Day in Hell' and other previous singles.

Despite the unfortunately predictable lyrics the album maintains a high standard of high-energy blues. Through 'I Can't Quit You Baby' to 'I Can't Find my Baby' (hmm?) a feeling of love and loss permeates the music. The album makes a strong finish with the slow-burning and somewhat Clapton-esque 'Torn Inside', complete with echoing guitar and a bass riff that shows that quite often less is more.

All in all, a worthwhile buy for rock and blues lovers alike.