A review of their album 'At War With The Mystics' 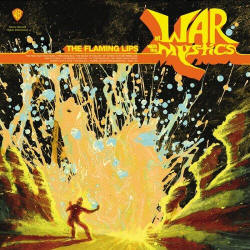 Review Snapshot:
Another weird and wonderful production from The Flaming Lips. They maintain that left wing oddness that has defined them and was surely inherited from such bands as Pink Floyd. This is no transitional album. It is very much the same Flaming Lips that brought us Silver Bulletin and Yoshimi Battles The Pink Robots. Even for the high standards they have set, this album is one of genuine quality and well worth a listen.

Full Review:
First and foremost, At War With The Mystics isn't anything overly complex. However, as with most Flaming Lips albums, it takes time and persistence to truly appreciate.

It starts off with two energetic tracks - The Yeah Yeah Yeah song and then Free Radicals - before delving into over 20 minutes of mellow psychedelia over the next three tracks. A somewhat strange album structure, but it works well.

There is plenty to like about this record. Drum and bass lines are further developed than in previous work. Mr. Ambulance Driver is a quality pop tune, a clear highlight of the album. The W.A.N.D (The Will Always Negates Defeat) effectively blends organs, guitar and background vocals.

This is a big and imporatnt album for The Flaming Lips. Soft Bulletin and Yoshimi brought mostly critical acclaim. But the reputation of the Flaming Lips that was built on the back of those two albums has given them greater focus in the public eye. Some feared that this window of opportunity in the mainstream music market would have meant a change in direction. Fear not. If anything they have pushed their own boundaries a bit more and remain one of the oddest acts on a major label.

So is this album as good as Yoshimi Battles The Pink Robots? Yes. Is it as good as Soft Bulletin? No. The Soft Bulletin remains the band's greatest work to date and although At War With The Mystics pulls a punch with its funky rhythms and tweaked sounds it never scales the heights of The Soft Bulletin. But don't let that put you off, the album is one of the best to be released so far in 2006 and, despite being the band's 12th album it manages to sound fresh, fun and funky. It will put a pep in your step and a smile on your face.