Review of their self-titled debut album 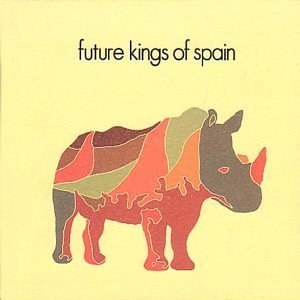 Perhaps the most noticeable thing about Dublin outfit Future Kings Of Spain's self-titled debut is that large chunks of it could easily fit into releases from the nineties (not that that is always a bad thing, of course). It is also apparent that it's from American acts of the previous decade that Future Kings? seem to mainly take their cue from.

Apparently, one of the first gigs for this three-piece was supporting J Mascis and the Fog. That's certainly believable, as Dinosaur Jr provide the blueprint for much of this record, particularly in the likes of 'Your Starlight'. The sweltering 'A Place For Everything', which has a QOTSA-like riff, kicks things off rather nicely. It's followed by the aforementioned 'Your Starlight', which along with 'Hanging Around' proves that F.K.O.S. can certainly write big rock songs with big swaying choruses. 'Venetian Blinds' recalls early Weezer with its bristling harmonies.

So far, so good. However, the album takes a dip midway with mediocre tunes such as 'One Look' and 'Meanest Sound' taking up too much space. Indeed in terms of timing, 'Future Kings Of Spain' seems fairly concise in that only the final two tracks go over the five-minute mark. Strangely, this is one of my biggest grievances with the album - a lot of it seems fairly constrained. The album comes back up a notch courtesy of some premium riffage a la Sonic Youth on 'So Wrong', and the faux Nirvana-isms of 'Face I Know'. 'Traps' is yet another song that sounds like it was influenced by Sonic Youth. However, while much of the Youth's work sounds more spontaneous, F.K.O.S definitely seem to be holding back.

For a debut album, this certainly shows potential. Nevertheless, I believe that a rawer production job would certainly compliment frontman Joey Wilson a lot better. If FKOS can do that, and simultaneously try to develop their own sound a bit more, they are going to be ones worth paying attention to. If they don't, any chance of them achieving rock royalty status will be scuppered.