Review of their album 'Iag Bari' 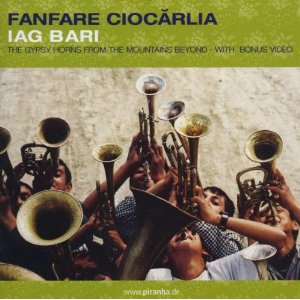 At home they're tagged as the "fastest, zaniest and most endearing brass band" in town. Beyond the Carpathian mountains in the north of Romania, there's a Gypsy village called Ece Prajini - Ten Fields. That's the home town of Fanfare Cioclarlia, the hamlet where they've played weddings, funerals, christenings, and whatever other excuse for a party came up. In a culture not far removed from the traditional music scene in the west of Ireland, the band made their way as parochial accomplished amateurs to a level of excellence which had them noticed by a German agent talent scouting post-Ceaucescu Romania. In a Buena Vista Social Club kind of way the band's brassy blend of wedding music (so labelled because gypsy bands have long been the players of choice at eastern European weddings) ended up on stages across the world. This writer has watched them charm audiences in several European capitals since I first saw them in Brussels in 1998. Veterans of the legendary worldwide 'Time of the Gypsies' tour, the band has just hit Europe's roads and airports on tour with another bunch of Romanian maestros, Taraf des Haidouks.

On their latest CD 'Iag Bari' Fanfare Ciocarlia come west with drums, trumpets, clarinet, bass tuba and baritone horn to make wild, exhilarating wedding melodies and dance rhythms, Horas and Sirbas. Iag Bari means "big longing" and the music should cause a big longing for a dance floor in most listeners. Fanfare Ciocarlia's trademark staccato-technique is what you need for extremely fast dances. Perfect wedding music, though at a pace that'll be a bit tough for waltzers at a country n' Irish weddings.

Fanfare Ciocarlia band has always had a leg-moving ability to produce great music. This album was recorded in Bucharest on the band's return from a world tour. Before getting back to their village the group stopped in the Romanian capital to record with the Romanian godfather of Oriental Pop, Dan Armeanca. Also gathered in the studio were about half a dozen other groups from Armeanca's producing career. These include famous Bulgarian voices "Angelite", Romanian trumpet virtuoso Costel Vasilescu and Rom Bengale, a group of Gypsy punks from Bucharest. No surprise then perhaps that he album has been labelled by aficionados as the group's most "urban" to date.

With some of the tunes clocking a stunning 200 beats per minute, Fanfare Cioarlia blow apart every musical definition on this recording. Techno beats are sounded from the Ivancea brothers' battered brass instruments. Ioan Ivancea and Radulescu Laar pit their vocals with Monel Trifan's tuba and percussion to produce something that's too powerful and too aggressive to be folk music. But then on the other hand there's far too much musicianship here for this to be labelled punk. This is powerful, tender, big-hearted and dangerously exciting music that's fit to lift the spirits and raise parties from the dead.

Just after listening to the CD I spotted an advertisement for the band's double-header show with Taraf des Haidouks, at the wonderful Cologne Philharmonic building. They'll be there in April and perhaps in Ireland before or soon after. If they don't make it to Dublin, I'll make it to Cologne. You should too.