Review of their album 'Danse Macabre' 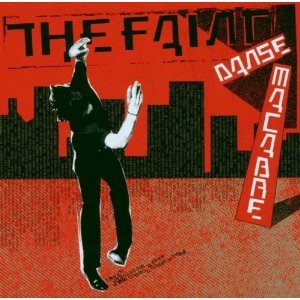 Every few months a new album comes out with obvious Depeche Mode influence. Most are worthless, nonsensical and so arduously drudging that you actually want to put on some Duran Duran. Yes some albums really are that bad. But every now and then a gem comes along. Ok so it may be a slightly flawed and dusty gem, but a gem nonetheless. The Faint hail from Nebraska and on their third album they go more dance than their previous efforts. Also the sexual subject matter that dominated their old songs and was becoming a little tiresome, have thankfully been eradicated in favour of singing about death. Ok so not the most uplifting subject matter, but still better than hearing non-stop tales of casual sex.

'Agenda suicide' opens the album with a bang, thrusting beats and raucous guitars into the listener's ears. Right from the beginning this album is sonically extravagant, considering it was recorded on a shoestring budget. They always had the songs before, but sometimes the production and mixing let them down slightly, so it is good to see this problem being fixed.

The New Romantic influence really comes through on 'Your retro career melted', but it is also mixed with a healthy dose of more contemporary artists such as Daft Punk resulting in a fresh sounding song, that still feels comfortable and familiar.

Despite its depressing grim lyrics, 'Posed to death' is a bizarre joy and produces memories of Soft Cell when they actually made interesting music. Unfortunately they take the 80's synth pop/modern rock crossover too far with 'Totl job'. It does not cut it and fails to produce the same kick as the rest of the album.

The really good thing about this CD is that the best is kept to the end. The final three songs really display this band's talent for keeping synth-pop alive. They don't experiment and change the style so much that it is unrecognisable; rather they subtly introduce new aspects to the recipe keeping everything fresh and alive. This can be seen in 'Violent', where the song fluctuates between classic synth-pop to euro-dance to almost Marilyn Manson style throbbing bass.

They produce very few cringe worthy moments and even when they do, they can be easily pushed aside by the brilliance of the rest. And 35 minutes after it started, it is all over. Punchy, retro yet experimental and basically damn entertaining, The Faint have produced a fine album enabling us to all dance to a style of music that was sometimes too cheesy in the past.