A review of their album 'This New Day' 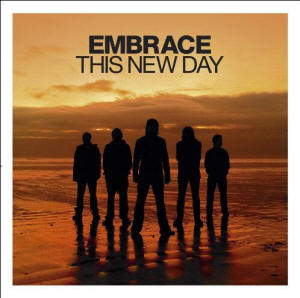 Review Snapshot:
The comeback kids of 2004 return with another anthemic, nasal-driven album. The trademark rousing choruses and ballads are all here and it's about as life changing as a Sunday lunch with your grandparents.

Full Review:
The funny thing with Embrace is that they haven't changed their style since 'The Good Will Out', they fell out of fashion among indie circles after their third album and then came back to the level of success they had at the start of their career. But history could well repeat itself as their latest LP is of lesser quality than their 2004 return 'Out Of Nothing'.

So we basically know what we're gonna get from this: dripping piano ballads to make the listener deeply pensive but also instil some hope, choruses that sound as if they're being shouted from the roof tops to an attentive world and lyrics in the vein of how 'nothing will ever keep me down coz I've got heart'. Yeah.

In all fairness, and blatant cynicism aside, there is an everyman quality to Embrace and their songs. It took a few listens to even remember a tune but after the second time it left a vague impression upon my ears. Singer Danny McNamara claims these are the most personal lyrics he's ever written, though with choruses (from the single 'Nature's Law') such as "you should never fight your feelings / when your very bones believe them / you should ever fight your feelings / But you have to follow nature's law", it seems that it could've been lifted from any number of other albums, and I'm not just talking about Embrace releases. I guess it's just that we have heard this kind of underdog preaching already, and that's what their fans love but they must be fairly hard on their luck a tad often.

Track titles such as 'No Use Crying', 'I Can't Come Down', 'The End Is Near' and 'This New Day' all suggest, and are indeed, examples of their tried and tested formula. McNamara said that after 'Out of Nothing' he felt that he had given his all and didn't want to look at a blank piece of paper again. They recorded this album in a nine day session and it shows. Despite his pride in his work during a "turbulent personal time" in his life it bleeds into one amalgam of piano chords, guitar riff/solo. This should please Embrace's existing fans but it won't be the biggest pull for newbies (though I do recommend them live as their sheer positivity spreads like that of the Artic Monkeys does on indie scenesters).

If you want to revel in the sound of a band fully revved and revitalised than get Embrace's previous releases 'The Good Will Out' or 'Out Of Nothing' before you expose yourself to this rushed piece of standardised stimulation.