A review of his album 'Doctor Syntax'

'Syntax': the way in which words are ordered and connected in sentences... 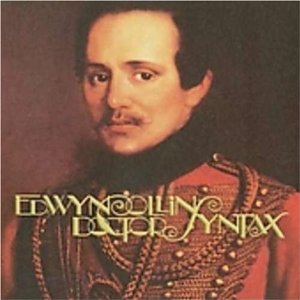 If this album is anything to go by then, Edwyn Collins picked up his doctorate in syntax from one of those dodgy distance learning colleges advertised late at night on shopping channels by failed actors. "What you are is a falling star / burning up on a bridge too far / All I am is an also ran / getting by any way I can" from the opening song 'Never felt like this' is just one of the many clich?riddled efforts on this album. The sad thing is that Collins does sound like an also ran. Apart from a couple of passable efforts this sounds dated and tired - it sounds unfinished, it sounds like a man really stuck for songs.

The other day I heard Collin's big hit from a few years ago 'Never known a girl like you before' and it still sounds class. Nothing on this album comes even close to the wonderful pop sensibility Collins displayed in that gem of a tune. 'Twenty years too late' attempts to blend a country intro, a dodgy 80's Euro-pop beat, a funky 70's disco guitar riff and an Adams Family type chorus. Attempt is the operative word here.

There are a couple of consolation tunes here - 'No Idea' bounces around in a harmless enough kind of way, 'Johnny Teardrop' has a crooning quality that might appeal to Robbie Williams for his next cabaret covers album. Ultimately though this is disappointing stuff from someone of Collins' calibre.