A review of his album 'Snow on Moss on Stone' 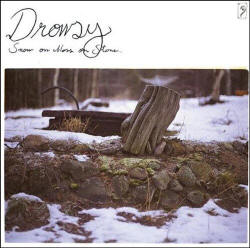 Review Snapshot:
Finnish singer songwriter Mauri Heikkinen follows up his debut with an album that fails to deliver on the promise that seemed evident on his first release. Although his label would have us believe that he's the next Nick Drake or Bill Callaghan, there is nothing on this record that insinuates such a destiny.

Full Review:
Mauri Heikkinen, a 23 year old Finnish singer songwriter, defected to his parents' house in a remote southern village of Joutseno in the summer of 2005 to write and record the follow up to his debut album 'Growing Green' which had, broadly speaking, met with a thumbs up from the European music press.

Released under the moniker Drowsy, 'Growing Green' was the culmination of several years worth of demos, late night recordings in friends' houses and road weary live favourites, all of which left it seeming disjointed and in need of a more coherent focus. Given that 'Snow on Moss on Stone' was to emerge less than a year after its predecessor, one would expect that returning to the sanctuary of Joutseno had provided Drowsy with the polestar around which to anchor his efforts. However, where 'Growing Green' was considered piecemeal, 'Snow on Moss on Stone' is found lacking in direction as well as the more problematic issue of floundering in the ideas department.

Ostensibly this record is comprised of ten delicate, alternative folk songs inspired by Heikkinen's parochial geography and intended to remind the listener of the joy and healing to be found in ordinary things. In fact it is nothing more than a repetitive, banal, sedative capable of putting the most ardent of coke addicts into a coma.

The album opener 'Bakery', an upbeat track more at home by a campfire, sees Mauri affecting a Jeff Mangum-esque vocal style to little success. This is followed by a run of acoustic guitar-driven songs centering on a single motif exhaustively repeated and imbued with little creativity. These range from a delicately plucked guitar line in 'Hues' to an aggressive and distracting Tourette's like growl in 'Treehouse'. 'Go Well' recapitulates the wilfully delicate guitar picking and is coloured ever so slightly with xylophone, which is not enough to assuage the boredom.

Finally respite arrives in the form of instrumental 'Good Old Odd Gold'. Thanks to the addition of more instruments - piano, accordion, drums and some effects pedals - there's more scope here, but given what's preceded it, expectations are low and, even then, are barely met. The track goes around in circles and the overuse of the effects pedal coupled with a drumming crescendo that builds as it is simultaneously being faded out, renders it another disappointment. The remaining tracks range from funereal to childish in tone but remain consistent in their mediocrity, the one exception being 'Bed of Pyre and Wood'. Here Mauri sings in a deeper voice than before, there's more gravel and grit to it, at last an honest feeling to hang your ear on. The eerie atmosphere of this flawed shanty sung through an ailing breath is affecting, but just as our interest has been jolted, the song comes to a premature end.

The one redemptive feature of an album this musically trite would be an impressive aesthetic realised through an imaginative lyric. Alas there is no such redemption here. Heikkinen simply alludes to natural events believing this to be a sufficient means of getting his point across, there is no insight, little wit and all too often no value to his lyrics, "In the old worn pine tree / runs the father squirrel wearing his cream tail / he gathers food knowing that soon it'll be snowing / keep the family full and warm when it'll be snowing".

Drowsy may have been secure in the bosom of his family, surrounded by the landscape and natural diversity he loves during the making of this work, but 'Snow on Moss on Stone' is not a record that reflects this. Instead it seems like nothing more than a summer project, cobbled together over sundown, by a mind unwilling to articulate fully, musically or lyrically, the beauty borne witness too. Ultimately this is a na?e and frustrating album, where Drowsy attempts intensity he achieves apathy, where he seeks to emote he sounds indifferent and where he endeavours to be creative he manages only to seem self-conscious and tired in his approach.