A review of his album 'Morph the Cat' 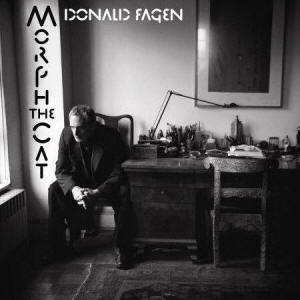 Full Review:
1975 in Sydney Cricket Ground, it's hot as hell, and the Aussie crowd are baying for blood. It's England against Australia and Keith Fletcher is coming out to bat. He speaks to his teammate John Edrich, who's been batting for the last couple of hours. Edrich is in his mid forties and two famous fast bowlers, Lillee and Thomson, have left him with broken ribs and black and blue from head to toe. "What do you reckon John?" "One tour too many, Fletch, one tour too many". Set this to music and you have "Morph the Cat", Donald Fagan's latest album.

Fagan is of course Steely Dan's frontman but there's barely a discernable difference between his solo material and the band's output. Fagan is a renowned perfectionist - adding overdubs on Christmas day, writing note for note sheet music for every solo.

I'm an indie kid, I think I always will be, but for me Fagan's and Steely Dan's sounds down the years have been a guilty pleasure, and an intoxicating brew - catchy guitar hooks, underlaid by smooth as silk Fender piano lines and ornate but non intrusive brass arrangements. And then there's Fagan's voice. We're talking polar opposites here but if he reminds me of anyone it's Mark E Smith - like Mad from Manchester he's physically unable to sing anything without sounding sarcastic, caustic, and utterly world weary. There's been three Fagan solo outings in twenty five years - "Nightfly", with its synths and sixties mood was an edgy little piece of work while "Kamakiriad" was arch, knowing, and luxuriant fun. The latter's "Snowbound" and "On the Dunes" are as close to silky musical perfection as you'll get.

On the new album's opener Fagan sings about Morph, "a Rabelaisian puff of smoke" an ethereal cat that brings happiness to the citizens of New York. It's almost perfect Donald Fagan, the cool grooves, a touch of jazz and a smidgeon of pop, and an almost Christmassy chiming chorus. It's let down by, of all things, the vocals - it seems Fagan's pipes are not what they were, they're either mixed down or multi layered. "The H Gang", a tale of an imaginary band, is a filler, pure and simple, and the only time the album really kicks is on "it's what I do", a bleak little number in which Fagan has a conversation with the departed Ray Charles. Fagan is, for him, very upfront about himself and his life, and there are no nods and winks. Irony has gone AWOL and heartfelt, for once, is the new Fagan deal.

Thereafter it's downhill all the way. "Bright night gown" is supposedly a fable about about death in its many forms but it's ruined by Fagan's ropey falsetto and some over fussy horns. "Security Joan" is a cute little tale in which Fagan picks up a security guard when he misses his flight. In fairness it's cute until the band take off on a jaded jam session. "Mary shut the garden door" is a tiresome whine about the current Bush administration and the album closes with a slack reprieve of the title track.

The playing on "Morph the Cat" is absolutely perfect, almost clinically so. Like most of Steely Dan's work , most of the musos here are session players, mercenaries in anyone else's language. This concept works when the songs are good and the creative will is intact - However the creative spark is missing so the licks and leads sound more desultory than effortless.