A review of his album 'Diving For Pearls'

Dominic Mulvany will be a name unfamiliar to most people, but to me he's the Stanley Kubrick of the Irish Music scene: he doesn't release material that often, but when he does, it's certainly worth waiting for. 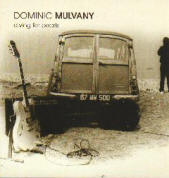 Diving For Pearls is his third album (his first since Vagabond Moon in 1990) and it comprises 10 original compositions that are pleasant on the ear. From the opening number Essence you find yourself singing along and tapping your feet, while I found myself trying to link each track to another artist. 'Mesmerise' for example is a ballad that could so easily have been lifted from a Clifford T. Ward album, while 'Making A Movie' was surely a hidden bonus track on a previous Travelling Wilburys C.D. Indeed, the resemblance  of Mulvany's voice to Harrison on this track is scary.

One standout song is Angel Star, another ballad of beautiful lyrics,and with harmonies the Beatles would have been proud of. 'Picture In The Sky' is the catchiest 3-minute pop song you'll hear this summer. The Debussy influenced chorus goes "then I saw your picture in the sky / knowing that this love was do or die", but the pinnacle of this album is the title track. 'Diving For Pearls' is a modern day masterpiece. An 8-minute opus that commences as a ballad, increases tempo through pop and rock, and reaches a crescendo with beautiful piano playing. Zeppelin may have 'Stairway To Heaven', Queen have 'Bohemian Rhapsody', but Mulvany has 'Diving For Pearls'.

With so many gems on this album, it's inevitable that there are a few fillers. These are easily overlooked as well as the repeated lyric of "putting on the rolling stones" on two numbers.

Dominic Mulvany may be diving for pearls but with this release, he's found gold.

For more information check out www.dominicmulvany.com