A review of his album 'Private Press' 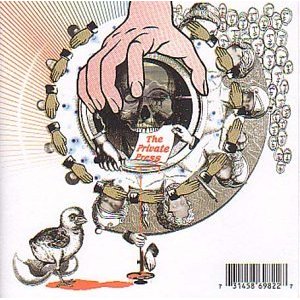 I rarely say this of a fellow human being but DJ Shadow, or Josh Davis to his friends, is a genius. 'Shadow's means and methods are well documented - basically he has over 10,000 vinyl albums locked safely away and from these he cuts and scratches any number of rhythm tracks, guitar breaks, orchestral and jazz clips, and snatches of dialogue. He then moulds all of these sounds into coherent shapes and forms. He describes his album collection as a "big pile of broken dreams" and in a sense he's the aural equivalent of a gravedigger. The thing is, he can pin down a lick and isolate a melody like no-one on earth. The Avalanches tried to queer his pitch but failed miserably- 'Shadow's more daring than David Holmes, more moody than Moby and more otiose than Orbital. He's quite simply the king of the Big Beat.

"Private Press", the follow up to DJ Shadow's 1996 ground breaking "Entroducing" collection, is shot through with the weaknesses and strengths that characterise all of Shadow's work. Everything that Shadow produces is born of obsession and it's lonely obsession too. Apart from his work on the very mixed James Lavelle Unkle / Psyence Fiction collection and other odds and ends he's pursued with various hip hop outfits it's clear that DJ Shadow is a one man band. You sense that at times 'Shadow becomes so wrapped up in the sounds around him that he loses sight of basic quality control. Private Press's "Right thing/GDMFSOB" and "Mashing on the motorway" obviously started out as good ideas. However the absence of a trusted and/or equally gifted collaborator means that these ideas very quickly run out of steam. It's not that "Right thing" or "Mashing" are particularly bad either, and besides, they are totally offset by other delights on "Private Press"-"Fixed Income" "Giving up the ghost" " and "..meets his maker" are classic DJ Shadow, tough rhythms, melodies that glide, arrangements that rip blood from every note. "Walkie Talkie" is the dirtiest of dirty rap underpinned with a slingy beat and a hardcore metal grind.

On "Six Days" DJ Shadow takes an acceptable piece of early 70s protest folk originally recorded by Colonel Bagshot, wraps it in shimmering strings, draws out the pathos of the tune and irony of the lyric and turns it into an absolute pop classic. If that was not enough there's "You can't go home again"- imagine a sickly sweet 80s instrumental collaboration involving New Order, Van Halen, Colourbox, Altered Images, The Three Johns and a host of mulleted others, stick it over a big choppy stuttering beat, cover it in cheesy synths - it's as much as you can do to just listen and wonder.