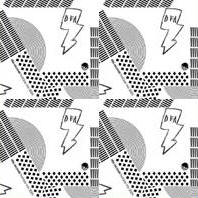 Review Snapshot:
If you're looking for quality dance music, then for goodness sake put that awful "Euphoria" compilation back in the bargain bin, and get this budget-priced compilation now.

Full review:
As record labels go, DFA rock. This is evidently not exactly groundbreaking news to most people, considering how well LCD Soundsystems' debut album was received. For me personally, ever since a DFA mix CD entitled "Dance to the Underground" given away free with "Muzik" magazine found its way into my CD player in early 2003, it was pretty clear there was something special going on. Naturally enough then, I was pleasantly surprised when seemingly out of the nowhere, DFA recently decided to drop a nine track "Holiday Mix" CD at a low price, between 5-10 euro depending where you buy it from.

It consists mainly of remixes of tracks from various DFA artists along with two previously unreleased tracks. Whether you feel paying for a CD mainly consisting of remixes is good value, I'll leave to you, but speaking as someone who already has at least six of these tracks in their original album form, I think the quality of the remixes on offer makes it worth every penny.

It's pretty hard to pick out a particular highlight as the quality remains pretty consistent throughout. Noise merchants Black Dice get to showcase their funkier side, the excellent Rub'n'Tug mix of LCD Soundsystems' "Too Much love" pushes things further into acid house territory, and the Eric B dub of The Juan Macleans' "Give Me Every Little thing" maintains the tight, funky minimalism that made the original great, while still making it feel sufficiently removed from its source and adding more pleasant synth textures too. There really isn't a poor track here, even the Tiga remix of the LCD Soundsytem track "Tribulations" which initially felt a little underwhelming is steadily growing on me.

This is an CD that I'd definitely recommend to go out and buy as soon as possible, especially because it will only be available for a limited time. If this was a full price release I have to admit I'd probably give this album a lesser score but considering DFA's generosity of spirit here (which contrasts strangely with the scary EMI copyright warning on the back of the cardboard sleeve), it seems only right to award this a solid ten out of ten. I could complain about the fact that there isn't a copy of the wonderful - but now defunct - "Muzik" magazine attached, but that's just picking at straws.

This limited edition compilation album is released by DFA Records