A review of his album 'Cripple Crow' 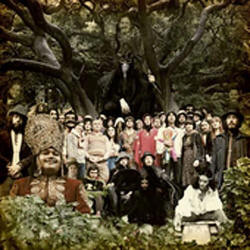 Review Snapshot: Self-indulgent pseudo-hippy nonsense which could be the soundtrack for a Mel Brooks Woodstock parody starring Leslie Nielsen.

Full Review:
Devendra Banhart likes The Beatles. We can tell this because the murky group-shot cover of his new album Cripple Crow is an obvious homage to 'Sgt. Pepper'.

Moreover, he even has a song called 'The Beatles' which begins by helpfully bringing us up-to-date on the Fab Four bodycount (only Paul and Ringo left, all you stalkers!). It then, for some mystifying reason, moves into an attempt at Peter Sellers' Indian accent from 'Goodness Gracious Me' before settling into the sort of tourist-board South American trad that belongs on a Lonely Planet world music sampler.

However, his favourite Beatles record seems to be the White album and in particular '....Bungalow Bill' with its acoustic sing-along and its self-satisfied 'all my stoned mates in the studio clapping and cheering at the end' ending used frequently by Banhart on his tracks. It typifies the contrived 'authenticity' of this record.

Meanwhile, can you guess what his lyrics are about? Surely not vague pseudo-hippy babble about getting away from The Man and his rat race, with the word 'war' thrown in occasionally? That this album was actually recorded in Woodstock is as nauseatingly predictable as the tracks it contains.

With 22 tracks sprawling over 74 arse-numbing minutes, Cripple Crow is hopelessly self-indulgent. It's a pity, because on the few occasions when Banhart applies the quality control - as on the short but pretty 'Dragonflies' - he shows flashes of McCartney-esque melodic craft. Generally, though, Banhart is happiest when he's wasting an hour and a quarter of your valuable time with his witless meandering and irritating stoner-drawl.

Already this year we have heard the awesome Amadou & Mariam record on which producer Manu Chao brilliantly fuses western pop sensibilities with ethnic sounds to create fresh and invigorating music. In comparison, Banhart's feeble grasp of world/folk music comes across as a shoddy, flashy sweatshop counterfeit.

It's probably this month's top-seller in Tower Records of Goa, however.