A review of their new album 'De Jimbe' 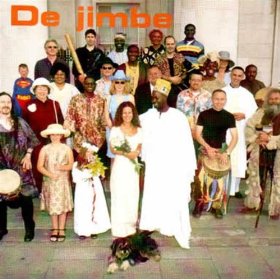 De Jimbe are a multi-cultural band who avail of all kinds of percussive instrumentation including djembes (so that's where they got their name from...), congas, djouns djouns, talking drum, rhumba, darabuka, bongos, bells, maracas and basically any other vulnerable object which projects sound (including our very own bodhran). They mix world rhythms with traditional Irish melodies and Irish instruments. If you can't stand anything to do with traditional music then this album will change all that, for De Jimbe have crafted a masterpiece, a superb fusion of the best of Irish and the ethnic.

When De Jimbe were first formed in 1995 by Cork man Brian Fleming, the idea of fusing rhythm based music from Africa and beyond with melodious trad from Ireland seemed like a curious and exciting experiment. The purists would hate it but the resulting fusion and tension between the pulsating, hypnotic rhythms and the intricate airs is what gives De Jimbe their original and outstanding sound.

The timing of this release couldn't be better. As Ireland comes to terms with its many foreign influences, the music of De Jimbe celebrates this diversity and offers the listener a multi-cultural barrage of the finest ethnic music this year. Two live tracks, 'Lagos to Lacken' and the percussive explosion that is 'Gurrier in Guinea' (complete with an audience member asking: 'here mister, giz a shot of your bongo') indicate that De Jimbe would be a serious proposition live.

They twist traditional standards into their own making, 'Is Fada Liom Uait - being a fine example of this. As their sleeve notes put it : 'A popular traditional song, this is the less well known Munster version - De Jimbe style. And so, the song starts as a mountainside air before stopping off in Nigeria for a minute or two.

It's hard to pick out individual tracks for stand alone appraisal suffice to say that they've all got their own strengths and occasional weaknesses. 'Chloe's Comparasa' is probably the only mixture of Cuba, Munster and Africa you're likely to hear in your lifetime. Elsewhere, the vocals of Muireann Nic Amhlaoibh are suitably mystic and mournful, the uileann pipes soar and everything else is simply first class.

With the exception of Kila and the Afro Celts, there is simply no-one bringing traditional music to such new levels. The days of the 'Irish Rover' and other such tourist-related traditional tripe are long over. Traditional album of the year by a mile and if you hear of De Jimbe playing live near you (they play the Cobblestone most Mondays) then get ready to shake a leg. Or something.

Trivia fact: Another recent achievement of De Jimbe was the creation of the Millennium drum which sits on page 12 of the Guinness Book of Records as the largest drum in the world.