A review of his album 'Since Kyabram' 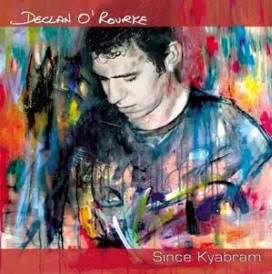 Review Snapshot:
A hybrid of folksy and indie-pop tunes that instantly become personal favourites due to their sincere lyrics, soft melodies and laudable injections of instrumentation.

Full review:
Your instant reaction with seeing this review might be 'Not another Irish singer-songwriter'. And nobody would blame you for expressing that frustration. But whatever you do, do not dismiss the talent of Declan O'Rourke. At least not before giving him a fair listen. He is so much more than just another singer-songwriter. Renowned songstress Eddi Reader considers that 'he happens to be one of the finest songwriters on the planet', someone who has been around long enough to recognise when an artist has something special. And as soon as the CD begins, the maturity of the song-writing stands out.

While many singer-songwriters are renowned for their song-writing abilities, there is much further depth to what O'Rourke writes. His songs deliver something special each time they are revisited and thus enjoyed with the same satisfaction of when they were first discovered. The mastery of O'Rourke's song-writing is very surprising considering this is his debut album. From the opener 'No Place To Hide' to the final track 'Marrying The Sea', each song is excellently sculptured with a backbone of tender harmonies on top of lyrics that strike with an aching honesty and some vivid imagery. The most impressive tracks are 'Birds Of A Feather' with its amorous sway, 'Your World' that causes a stir with its upbeat, addictive feel, 'Sarah (Last Night In A Dream)' which gets right under the emotive barrier to ignite the senses, and the sweeping strain of 'We Didn't Mean To Go To Sea'.

Besides 'Your World' and maybe 'No Brakes', 'Galileo (Someone Like You)' will be the song that morphs you into a Declan O'Rourke fan. It is such a gorgeous song assisted by some flawless fiddle and cello playing, and contains a chorus that will no doubt be included on valentine's day cards for years to come - "Who puts the rainbow in the sky? / Who lights the stars at night? / Who dreamt up someone so divine? / Someone like you and made them mine". His lyrical skill aside, O'Rourke has a decent voice plus he plays the guitar extremely well.

So I don't see where any complaints can come from regarding this cd. Even the artwork by Faye Briony and John Donegan is superb. For a debut album, it has everything. From a rocking tune ('Your World') to a cherished love-note ('No Brakes') to a folksy ballad ('Marrying The Sea'), O'Rourke proves that he has the ability to surprise, entertain and comfort the listener.