A review of his debut album 'The Big Romance' 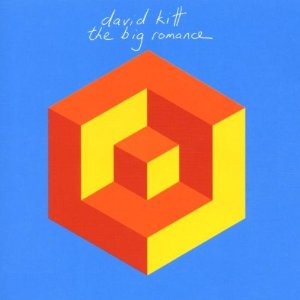 David Kitt's second album is all around us. On billboards, in train stations and advertisements all over town, one cannot escape the striking shapes of the sleeve and the so-fashionable lower case hand-written title. It begins with a revamped "Song from Hope St" which flows along at a somewhat jaunty pace vaguely (and briefly) echoing those positive vibes that Nick Drake's "Bryter Layter" emitted thirty years ago, but all this before the track splutters to a weak and unsatisfactory conclusion.

The danger signs are appearing already and we still have almost 'one more hour' (give or take 10 minutes) to go. Then "You know what I want to know" slinks by like a guilty schoolboy who has been caught having a furtive fag and we're thinking 'well David, you're pushing all the right buttons but we're still unmoved'. The throwaway and pointless "Private dance" is weaker still - giving the listener cause for immediate concern and raising the pertinent question about the almost overwhelming praise that has been bestowed upon Kitt over the past few months - how the hell can it be justified?

"Step outside in the morning light" along with "Whispers return the sun, rest the moon" are the only conclusive evidence of the LP's ability to inspire repeated listening. The former is a plaintive and atmospheric piece, well-performed while the latter contains a nice trumpet solo, with an almost energetic feel before it is ruined by trying to be a lo-fi epic when plain old lo-fi would have sufficed. Indeed that is one of my main gripes with "The Big Romance" - a lot of the songs drag on and are ultimately suffocated by their own over-ambition where perhaps a little editing and some attention to brevity (combined with a cohesive style) may have proved more effective and made for a half-decent album.

"Pale blue light" for some reason reminds me of a futuristic Field Mice. In other words what the Field Mice would sound like now if they hadn't decided to call it a day in 1991. Stagnant and long since run out of ideas. "What I ask" (complete with the superfluous add-ons of a Nina Hynes vocal and some aimless 'ahs' and 'dahs') is dreadful. The insistent refrain is annoying as opposed to addictive and to compare this to the likes of the Cocteau Twins / MBV is absolutely ludicrous. The song has all the emotional punch of Laibach covering Hank Williams.

The third track with 'light' in the title, "Strange light in the evening" is languid to the point of wilful whimsy with it's inexplicably praised graffiti bench lyrics and overtly profound final revelation. "You and the city" is hopelessly forgettable while "Into the breeze" lurches awkwardly into a feeble album finale.

Some people will describe the record's front cover as an optical illusion. Sadly when you push away the fawning cliques of Dublin's indie circle and bypass the ridiculous hype, and actually listen to the finished product you'll realise the music is also an illusion. Despite Kitt's ramshackle, stoned exterior, the scrawled inner sleeve handwriting and meandering musical directions, "The Big Romance" is a deeply contrived and derivative work which is neither original nor addictive but immensely disappointing and almost completely dull.

Click here for a more positive review of 'The Big Romance'

'The Big Romance' is released on Blanco Y Negro records