A review of his album 'The World Should Know' 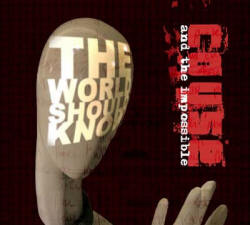 Review Snapshot: Uninspired indie-by-numbers, cheap sneering at celebrity culture, weak singing - all in all, a disappointing release from someone with such a proven track record for likeable and distinctive guitar pop. Where have all the good times gone?

Full Review:
Although A House are often held up as an example of the typical Irish almost-famous big-label failures of the late '80s and early '90s, they were in fact more successful in real terms than most Irish bands - UK Top 40 singles; plenty of Stateside exposure; Duffer, Robbie Keane and the lads re-recording one of their songs as their official World Cup anthem ('Here Come The Good Times' - ah, the pre-Saipan innocence of it).

Still, Dave Couse seems to be perceived as a slightly bitter could've-been-a-contender, which is unfair on the man. Unfortunately, his new record 'The World Should Know' with backing band The Impossible does little to dispel this notion.

For sure, it begins well with two likeable tracks - 'A Celebration' is a happy bit of dumb fun and single 'Batman and Robin' is catchy and breezy. So far, so good.

After that, though, the heart sinks to see song titles like 'Beauty Is' and 'Celebrity Fakers' and 'All I See' on the track listing - oh no, you say to yourself, surely not self-righteous sneering at the usual clich? targets of superficial celebrities and media stars and spoofers? But there he is, blasting away at 'catwalk queens' and 'advertisers' who 'sell us fears', without the least trace of irony. Are Top 40 footie-anthem frontmen not prone to a bit of popularity and vanity too?

And 'Celebrity Fakers' features Couse in spoken-word format (similar to A House's 'Why Me?') laying into the 'voyeurism' and 'lowest common denominator' of MTV Cribs - as if it were news to us that a show about looking around the homes of famous people could be anything else. Very quickly Couse manages to kill any goodwill towards this album with such tired ranting.

Musically, the rest of the album sounds tired too, mainly its dependence on recycled guitar parts in one of two default settings - American alt-rock slashing or Britpop chord-picking. And though Couse's voice was never his strong point anyway, his scraping upper-register vocals on '******' (pronounced 'Stars', it seems) are so excruciating as to be beyond belief.

Dave Couse has written plenty of fine pop songs, and two of them happen to open this record. Unfortunately, the rest of this album checks all the boxes of bargain-bin indie consolidation. Now there's a target worthy of Couse himself.