A review of his album 'B-sides' 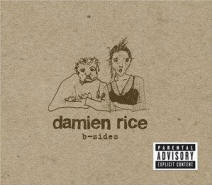 Review Snapshot:
A new release from the former Juniper frontman has been long overdue. This collection binds together four b-sides with four alternative versions of songs that feature on his debut album 'O'. For fans that want to discover the rawness of Rice's lyrics and vocals, this is an insight.

Full review:
Is this album a cheap attempt by Rice to exploit his newfound success? Or is it a genuine effort to give his fans something before his belated second album is released? Well both really but that depends on who you talk to.

When he left behind doing shows in places like the Temple Bar Music Centre to tour America and appear on the David Letterman show, something changed. Rice has always publicised his disregard for the music industry but never has he been a hypocrite with his music. Until now that is. Many fans and critics view the release of this b-sides album as Rice adopting the dirty tactics of mainstream music companies. If he was genuinely doing something for his fans then he could've given them more than eight songs charged at full album price.

The first track 'The Professor & La Fille Danse' is very powerful in the way Rice weaves his vocals around the lyrics. Gentle strumming from his acoustic guitar rarely hits a higher tempo; in fact it almost disappears when he sings in French towards the songs end. On 'Lonelily', that veil of insecurity that sometimes hovers over his songs is again resurrected, and is aided by Vyvienne Long's smothering cello. For fans looking for that more personal insight into Rice, a glimpse of it is found on the third song 'Woman Like A Man'. Recorded for Galway Bay FM with Lisa Hannigan on backing vocals, Tomo on drums, Nickie Geddes on cello and Shane Fitzsimons on bass, it is the album's best track. Some of the lyrics are explicit compared to Rice's previous work but they suit the gritty tone that works well with Hannigan's backing vocals.

It is Hannigan who helped make 'O' that more bit sincere and it is her who is needed on more of this album (she only sings on two songs and plays bass on one) in order to give the album more credibility. Even her appearance on 'Moody Mooday' cannot help Rice deliver something more than a failed murmured atmospheric piece.

The live version of 'Delicate' is a solo tumble into an adequate take of the song that clocks in just under a dragged out six minutes. An instrumental version of 'Volcano' recorded in a mobile studio, climbs high with the musicianship on top form but sadly poor recording hampers it. A further insight into Rice is provided on the rough-recorded straight to Walkman portrayal of 'Volcano'. It's rawness and originality of being the very first recording of this song might excite certain fans. But then the excitement crashes with a sped up radio remix of 'Cannonball' ending the album.

For a b-sides album, there are not near enough of b-sides on it. Yes, some tracks are impressive but everything seems to descend after the first three songs. This album begs and pleads for more, properly recorded, Hannigan-assisted tracks. Since this is only half an album, it can only score half the marks. Five out of ten.

Is Damien Rice taking advantage of his devoted fan base with this release? Check out the discussion on the CLUAS Discussion board on this subject.