A review of his album 'Shots' 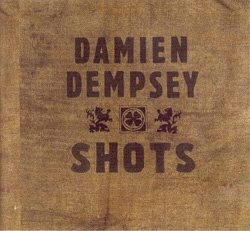 Review Snapshot:
Damien Dempsey's new album "Shots" sees him move towards the mainstream with more melody and less anger. But the honest lyrics and strong social themes are still there and that's what makes it an album worth listening to.

Full review:
Damien Dempsey's music seems to divide people into "either love it or hate it" camps. He's certainly not background music and the lyrics clearly enunciated in his Dublin accent cannot be ignored. His live performances are renowned, as his powerful voice gets full reign.

Shots is a follow-up to his 2003 platinum selling album Seize the Day. That album propelled him into the spotlight. He has also been promoted by the likes of Christy Moore, Sinead O'Connor, Shane McGowan and Morrissey who invited Damien to tour with him last year.

This latest album was recorded in Rockfield Studio in Wales with John Reynolds back as producer, and is a more polished and melodic effort. The harsh, hard-hitting social themes are still there, but they're toned down and cushioned by softer voices and more instrumental accompaniment with guitars, tin whistles and uileann pipes. The production is slicker and benefits from all the musicians working out the songs together in the recording studio.

On the album when he succeeds he has the ability to make you look at life's harsh realities without sermonising or making it sound depressing, like on 'Sing all Your Cares Away' and 'Not on Your Own Tonight', but on some tracks the message is driven home too strongly like the seven minute track - 'Colony'.

'Sing all Your Cares Away' is a slow and gentle introduction to the album. It's one of the strongest tracks, with a sweet melody and a message of escaping from your problems through music. The harmonies are soothing and gentle and Brian Eno provides backing vocals. 'Not on Your Own Tonight' is a song which Damien wrote when he was 16 or 17 sitting on O'Connell St. The strings add depth and warmth to the song, and it's a hopeful song, despite the tough circumstances he was living through when he wrote it.

The guitar intro to 'St. Patrick's Day' builds up with tin whistles, uileann pipes and drums. It's the most traditionally Irish sounding track on the album and deals with the tough times people in Ireland lived through before the Celtic Tiger took hold. 'Cursed with a Brain' has another strong message about starting to change things from within - "don't look out, look in, change yourself to begin".

'Party On' deals with the drugs culture in Ireland and its negative effect. I'm not sure it works and it sounds a bit too preachy, a warning of sorts to his audience.

'Colony', a song from his debut album "They Don't Teach this Shit in School", is simple and raw and highlights just how much his style has changed since he started out. The almost spoken lyrics about colonialism and oppression are shouted out and make the point a little too strongly.

It's followed by one of my favourite tracks on the album, 'Patience', which starts out softly and builds up with the full band really adding to the sound. It's followed again by another favourite, a rare treat, a love song - 'Hold Me'. It's his vulnerability and honesty on this song that really impresses; it's a gentle ode to love with none of the frills or soppy sentimentality of usual love ballads.

The tone changes with 'Choctaw Nation', about the Native American Choctaw people and the troubles they faced. It is probably a fan's favourite but for me as a relatively new Damien listener it just moves too far from the melodic tracks that have gone before.

The final track on the album, 'Spraypaint Backalley', is about having positive outlook on life despite your circumstances. There is a line from Oscar Wilde in the song which struck him when he was younger, "we are all in the gutter but some of us are looking at the stars", which seems to be where Damien is always looking, onwards and upwards.

"Shots" is an album that sees him grapple to try and reconcile the desire to have his music heard by more people while still maintaining his integrity and a strong social message. For the most part he succeeds but whether this move towards more mainstream music can be sustained and bring his fans with him only time will tell.