A review of their album 'Early 21st Century Blues' 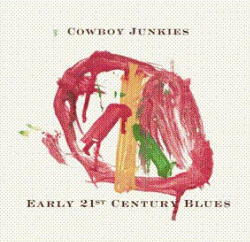 Review Snapshot:
Jules Jackson tries to keep his ears open, as his wades through Cowboy Junkies latest offering and comes to the conclusion that, perhaps, it's time we gave war a chance.

Full Review:
I  have spent the last month attempting to review this record and the reason for the delay is that I have been unable to listen to it all the way through, something which I feel is important when actually forming a critical opinion about a work of recorded music. My putative reviewing has not been helped by a legendary surf trip to North Africa which has left me more laidback than a reggae musician left in charge of a seizure of cannabis. Initially, I thought that my slow progress was due to the highly depressing thematic direction of Cowboy Junkies' latest opus which they describe as "war, violence, fear, greed, ignorance, loss?the fact that you can't get a good cappuccino in Kentucky (sorry, I added that one in myself)", but driving home from Wicklow the other night, I finally realised that the real reason I haven't been able to get the finger out is because this album is total dullsville.

Cowboy Junkies first burst onto the scene with their sophomore, recorded in one day in a church, album 'The Trinity Sessions'. Druggy and downbeat it featured acclaimed versions of Lou Reed's "Sweet Jane" and Hank Williams' "I'm So Lonesome I Could Cry". 'Early 21st Century Blues' deliberately retreads the artistic ground of that breakthrough with a similar mix of downbeat arrangement, quiet production and well known songs by legendary songwriters such as John Lennon, Bruce Springsteen, U2 and Bob Dylan and - as with all retreads - it sounds self aware, mannered and tired.

From the opening track 'License to Kill' through Lennon's 'Don't Want To Be A Solider' to yet another acoustic version of U2's 'One', (and no it's not getting better Bono, thanks for asking), this is a record of obvious political statements masquerading as a select choice of musical interpretations. According to the band, its their own 'small document of hope' but the only hope it engendered in me is that it would all be over soon and I could go back to listening to music intended for the living and not the living dead.

The Cowboy Junkies appear to be aggrieved at living under George W Bush which, and you have to hand it to them, is rum for a bunch of Canadians. Chief among their grievances with W. is the fact that he went to war with Iraq. No fewer than four songs deal directly with the theme of war yet none of them have the direct power of that old soul classic which states simply, "War / What is it good for - / Absolutely nothing". The titles of some of the songs chosen give you an idea of the sentiments, and this is a sentimental rather than an emotional record, involved; 'Two Soldiers', 'No More', 'Don't Want To Be A Soldier', I could go on but you get the picture. Worse, each song is delivered in Margo Timmins' peculiarly lifeless timbre, drained of colour and feeling, and backed up by a band that sound like they have overdosed on valium. The low point of the record, for me, is guest artist Rebel's vacuous rap over the Lennon track, its inclusion made me cringe in the way you do when you see your Granny dancing to 'Smack My Bitch Up' at some family function or other.

Maudilin and mediocre, if this is what peace sounds like, then perhaps its time to give war a chance.