A review of their album 'The Coral' 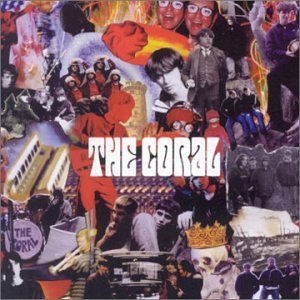 Everything about the Coral, a young Scouse combo, screams of their determination to follow in the footsteps of bands like the Bunnymen, Teardrop Explodes, and XTC, outfits that adapted the melodies, fripperies and sense of bizarre inherent in psychedelia. They added their own slant and sensibility to the deal and as a result they produced some truly outstanding music. However, listening to the Coral's eponymous debut album it's apparent that this band are too dazzled by their own sense of pastiche, so much so that they never get beyond its smugness and its constrictions.

To quote the Electric Prunes, the Coral had too much to dream last night - if you don't believe me check out "Shadows fall", the album's third track-the rhythm section clump out a seriously bogus Wurzels - like white reggae riff. The vocals are tight four part sea shanty harmonies, reminiscent of the Seekers. James Skelly, the Coral's frontman, croons earnestly that "from stem to stern I'm torn apart / mount my horse, pack my heart", and the song's middle eight is driven by a Keystone cops style sax solo.

"Shadows fall" is broadly of a piece with the rest of the album - "I remember when ", complete with Russian polka, sounds like a combination of the Las before Lee Mavers did one or the Woodentops before they vaporised. Then on "Goodbye", a soul shouter, Skelly sounds like Julian Cope stricken with a particularly bad dose of road rage. The foppish "Simon Diamond" is a weedy Small Faces out-take, and there is a serious dip in quality output on "Skeleton Key", the Coral's self conscious stab at the peerless Captain Beefheart. This track is a forced and facile attempt at discordance for its own sake. The Coral sound like Beefheart in the same way that Robbie Williams sounds like the Rat Pack.

"The Coral" features fine, if necessarily cluttered musicianship, and tight, if entirely unoriginal arrangements. The album's so sated with musical gags that it has little or no room for any kind of emotional depth. What's worse, the Coral are so arch in their intent that most of the musical gags are not funny.

Until they start seeing eclecticism as a path to glory rather than as an end in itself the Coral will continue to make pastiches of great albums rather than ever producing the real thing.