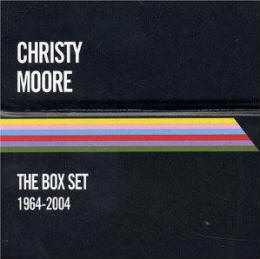 Review Snapshot:
A six disc box set for real Christy fans containing alternative versions of well known songs with original lyrics as well as unreleased material and hidden bonus tracks. For die hard Christy fans. Others may feel it's too much to consume all at once.

Full review:
I have always been a fan of box-sets and anthologies. They usually provide you with demo-versions of songs that record companies would normally never dream of making available publicly. This box-set covers five decades, and including hidden track, totals over 110 songs consisting of outtakes, b-sides, and live recordings, on six coloured discs.

The Yellow disc includes the rare 'Dunnes Stores', a song about the employees who refused to handle South African goods in the 80s. On the humorous side there's 'Ronnie Reagan' and a fantastic version of 'Don't Forget Your Shovel' that was left off the 'Live At The Point' album.

To top it off, there's the controversial 'They Never Came Home', the song Christy wrote about the victims of the Stardust fire in Dublin in the early 80s. This song was banned at that time, withdrawn from sale, and has been unavailable until now.
The Pink disc consists mainly of cover-versions. Included are 'January Man', 'John O'Dreams', and 'Jack Doyle'. For me the highlight of this disc is the original version of 'Joxer Goes To Stuttgart with the original lyrics, different to the ones we've grown familiar with.

The Blue disc tackles serious subjects including rape (Anna Lovett), Chernobyl (Farewell To Pripchat), and Christy's own composition 'Veronica'. A bootleg recording of 'Viva La Quinta Brigada' is also included, as Christy puts it "some sham taped it? with a ghettoblaster under his arm and a microphone stuck up his arse".

The Red disc opener is 'Lay With Me', a song that never made the 'Ordinary Man' album. A demo-version of 'So Do I' (This Is The Day) recorded 11 years before it made it onto his last album demonstrates just how long some songs can lie around. Don't miss the intro to the live version of 'Smoke And Strong Whiskey' where one female fan persists with Christy to take off his knickers. "I've been on tour for the last month and you don't want to see my knickers".

The Lilac disc includes 'North And South Of The River', and an 8-minute live recording of a Moving Hearts song 'No Time For Love' is a worthy inclusion. The Green disc contains 'The Bould Rake', the earliest Christy recording from 1964 and we also get the title track from his 1968 debut album 'Paddy On the Road'.

Of the hidden tracks, there's 'Delirium Tremens', 'City Of Chicago', and 'Strange Ways', to name but three. The only thing missing here is a live version of 'Me And The Rose' but that aside, this is essentially the best Christy Moore album in the world?ever!

Now That's What I Call Christy.