A review of their album 'The Camembert Quartet Sell Out' 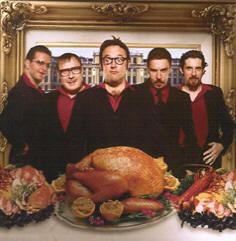 Review Snapshot:
Irish musical comedy troupe, The Camembert Quartet, have turned the Cluas discussion board into a viciously funny musical, much to the delight of Jules Jackson.

Full review:
Imagine if someone put the Cluas discussion board to music. Imagine if all those long, meandering posts on topics as diverse as The Thrills, Damien Rice, Glen Hansard, Louis Walsh's stable of Boy Bands, Dublin community radio, Irish singer-songwriters and Bono were set to hip, melodic tunes. Well, imagine no more my friends because on 'The Camembert Quartet Sell Out' that is essentially what you get, a musical based around the kind of moaning so beloved of the Cluas readership.

Originally titled 'Other Other Voices - C*nts From A Room' the record takes aim at the sacred cows of the current Irish music scene with a wit and venom that has been lacking in popular music for quite some time. Satirizing pop musicians is not a new phenomenon, acts as diverse as Spinal Tap, Corky & The Juice Pigs, Tenacious D, Weird Al Jankovic and even our own Ding Dong Denny O'Reilly have all taken a swing at the denizens of the music industry in the past, but their shtick has generally been tinged with a hint of sneaking affection for the target of their humour. Jack Black may lampoon the lyrical content of Ronnie James Dio's oeuvre but that is only because he spent so much of his youth in thrall to it. The Camembert Quartet are different because they genuinely hate posturing singer-songwriters who sing lines like, "I'm a really nice guy (with a hard neck) / I like telling people I don't know / Where my songs come from (somewhere) / Maybe that's why they're few and far between", or talent free Boy Bands who do not know that, "Nineteen ballads in a row / Does not constitute a show".

The hatred that the troupe have for what they consider to be the mediocrity of contemporary Irish music reaches its zenith on a track entitled 'California Dublin 4' where the band deliver a note perfect summation of The Thrills entire back catalogue in just over one minute and seven seconds. It is a viciously brilliant parody of a band who are themselves little more than a pastiche, and it contains lines such as, "Don't go back to Dun Laoghaire / Formerly known as Kingstown / Don't you know it's a one horse town", which must have Conor Deasy reaching for the smelling salts. On a later track entitled 'Serious' they deconstruct the self regarding attitude of a band who sound surprisingly like The Frames, even managing to comment on that group's writing technique, "And when we sing the chorus / We play the same chords that / We played in the verses / But they're louder". Utter genius.

Overall 'The Camembert Quartet Sell Out' is one of the year's finest releases and, if like me, you cannot stand most of the homegrown muck that is currently being talked up by a raft of cloth-eared DJs then I urge you to rush out and buy this record, if only to prove to yourself that you are not alone.