Review of their 'best of' album 'Sin City' 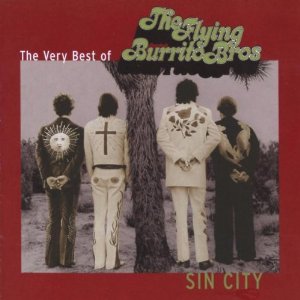 Perhaps one of the most talented members of that unfortunate "they died too young" club is Gram Parsons. Parsons was the pioneer of country rock, the man whose talent made the road easier for Ryan Adams to enjoy such a rock club cred and climb today's charts. Parsons died in 1973 but the afterglow of his musical legacy can be heard on these twenty five tracks. In an attempt perhaps to exploit the latter-day positivity afforded to Adams and similar-sounding groups like Beachwood Sparks, the record company has reissued a collection of material by the group Parsons fronted in the last, and best, part of his career.

Fans of the fabulously named Flying Burrito Brothers can now finally get both albums on one CD with decent mastering. The original issue mastering of Burrito Deluxe was after all especially bad. Few Burrito fans could be bothered handing over a fistful of euros for a bunch of songs recorded post-Parsons. So what's on offer here is the two Parsons-led Burrito Brothers albums, together in their entirety. Not always smooth, not always cohesive, this collection nonetheless bangs the gavel for the prosecution: the Flying Burrito Brothers were guilty of great talent. Parson's genius was of course the driving force behind the band. The childhood beneficiary of a trust fund, Parsons lived a stereotypically rock'n'roll existence, spending too much, drinking too much and consuming far too many drugs during his short life.

Looking eerily like his latter day disciple, Ryan Adams, Parsons is the clearest connection point between rock'n' roll and country. At nine he got an autograph from Elvis at a stage door, raced home and lip synched his way through 'Blue Suede Shoes' before being inspired to write his first song, Gram Boogie. At fourteen he was playing guitar with the Pacers, a US Top 40 success. After a no-lectures stint at Harvard University, Georgia boy Parsons moved to New York, gigged his guitar and piano playing to a high level of stage proficiency and then moved on to Los Angeles where he landed a guitar job with the Byrds.

Most Flying Burrito Brothers interest is in the Parsons era material, in the 'Gilded Palace' and 'Burrito Deluxe' albums, and this CD capitalises on that interest. As mastered by Gavin Lurssen this is a balanced and less shrill recording than the last collection of the band's work, the 'Hot Burritos Anthology'. Well worth a fistful of euros then. And yes, there's never, ever been a cooler name put on a rock band this side of Mars.