A review of their album 'Flowers' released in 2001 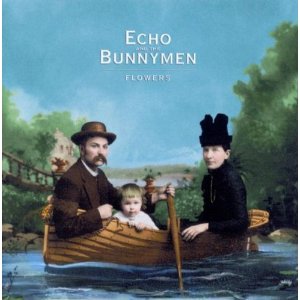 Well, well what have we here? After recent offerings from the bunnycamp even diehards were beginning to wonder if the only flowers 'round here were those wilting in front of the headstone marked "Greatest band of the Eighties". The words and music of Ian McCulloch and Will Sergeant had shone with such a brilliance at their height but recent output, sadly, would've struggled to get a response from a 40 watt bulb. It's a relief however to report that 'Flowers' is a welcome and long overdue return to form and a marvellous bunch of richly textured songs.

From the opener 'King of Kings' ("wearing broken wings") to 'Hide and Seek' ("help me get my feet back off the ground") and 'Buried Alive' ("don't wanna believe that life is just to die") we find Mac in a hauntingly reflective and introspective mode that few do better. Those jolly ones amongst us who ponder of life's futility will indeed find plenty of opportunities to wallow, but go steady with that gin. Just when you reckon Mac's got a terminal case of the blues the nugget that is 'Make Me Shine' will have you waving your Gordon's in the air whilst straight up rockers 'Everybody Knows' and 'An Eternity Turns' could have you hanging out your window and screaming at passers by. Closing lurve song 'Burn For Me' even gives Bunnymen classic Ocean Rain a decent run for its money.

Those unfamiliar with the sound of Mac and Will's universe might like to imagine Sinatra and Hank Marvin after necking a big pot of mushroom tea with Bowie, Cohen, and Morrison in charge of the biscuits. But don't write this off as dad-rock because this'll sit very comfortably next to your Starsailor CDs (and that's paying the young pretenders a big compliment).

For long time fans, it's time to dig out the shades and kick off the slippers. Love it.

Check out also a review of the Bunnymen's greatest hits album 'Ballyhoo'.

Check out also a review of Echo and the Bunnymen live in Dublin in November 2003.