A review of their album 'Square' 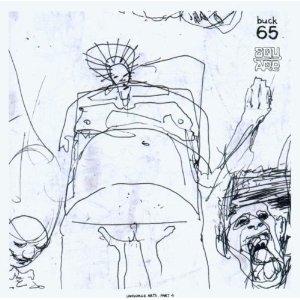 Well it certainly took him a while. After spending years on the underground circuits of Halifax Nova Scotia, New York and Paris, Buck 65 (Richard Tefry) signed to Warner Brothers last year. They are planning to re-release his previous five albums but until then we get "Square".

After picking up the CD I stared at the cover for quite some time. Something was wrong. I couldn't quite put my finger on it. Then it hit me! No 'Parental Advisory' sticker! Huh? But it's hip-hop!

Coming in at over 60 minutes long, this album is cut into four tracks. (Square One - Square Four). Admittedly I was quite disquieted by the thought of songs lasting longer than 15 minutes, but I should not have worried. An appetising mixture of hip-hop, rap, alluring samples and lyrics about looking for snack food in the kitchen cupboard is the recipe for a fascinating hour-long adventure. This is not your run of the mill hip-hop/rap album. Although the lyrics do sometimes deal with slightly taboo subjects, very little unsavoury language is used. No talk of guns, drugs or gangsters. Worse yet is the use of 'girl' instead of 'bitch' or 'ho!' What is the world coming to?

Rumoured to be a big Johnny Cash fan it is clear that Richard Tefry was influenced by a diverse range of artists in the making of this album. Strip away the beats and you will find very simple melodies that glide smoothly and entwine with the throbbing bass lines.

Tefry is responsible for everything on this album. His vibrant production is particularly impressive. Although at various stages the music can be layered with over 10 different sounds the album never sounds forced or suffocated. While it mainly relies on the music, when Tefrey does decide to rap, he demands your attention. His docile voice mollifies the songs creating a strange atmospheric peace that so many artists try to achieve and most fail.

The 'music pioneer' label may sometimes be applied too liberally these days, but for once it is well deserved. Richard Tefry is the future of hip-hop. If he can keep up the high standard set with 'Square' then the future of this genre looks very bright indeed.

Click here to buy new (and second hand) copies of this album on Amazon.

Check out the CLUAS interview with Buck 65.