A review of his album 'The Rising' 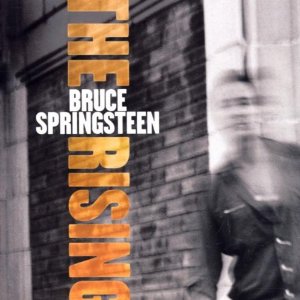 Bruce Springsteen's career has been characterised as being devoted to exploring the dreams and disappointments of America's white working class. By virtue of his very upper class wage packets, Springsteen may have left his working class background behind. He remains however that thing common to many societies: the poet-king, elevated above the normal Joes, but listened to and worshipped devotedly. He was, then, the obvious choice to produce an artistic tribute worthy of the working class heroes who perished on September 11th.

The blue collar heroes on The Rising are familiar: firemen, policemen, journeymen. But we find them in much sadder circumstances now, twenty years on from the promise and youth of the River.

All the track titles betray a sense of sorrow and loss, fused with the understandable but pointless thirst for revenge. 'Lonesome Day', 'Into the Fire', 'Waitin' On A Sunny Day', 'Nothing Man', 'Empty Sky', 'Paradise' and 'You're Missing' are all darkly sad compositions. Promise and hope comes on 'Let's Be Friends', 'The Fuse', 'Mary's Place', 'The Rising' and especially on the "Come on, rise up!" chant of 'My City of Ruins'.

The album's best track is 'You're Missing'. It focuses on the double horror of losing a loved one and not being able to say goodbye or at least have a burial ceremony, the corpse having been turned to ash. Lyrically a catalogue of absence: (coffee cup on the counter, newspaper on the doorstep), the song rises to greatness because Springsteen not only recognizes dramatic details but also knows what they mean. 'You're Missing', Springsteen himself has conceded, is one song that doesn't end hopefully: "God's drifting in heaven, devil's in the mailbox/ Got dust on my shoes, nothing but teardrops."

Springsteen's natural humanist instincts shine in the last two songs on the album. 'Worlds Apart' is a plucky - yet one could regret - over-optimistic take on the classic story of lovers separated by a cultural divide: Springsteen's lovers being an American GI and a Middle Eastern Muslim. "We'll let love build a bridge, over mountains draped in stars / I'll meet you on the ridge, between these worlds apart." Springsteen sings.

More daring and successful is Paradise, which opens from the perspective of a suicide bomber: "In the crowded marketplace, I drift from face to face" before moving into the mind of a woman who lost her husband in the Pentagon: "I brush your cheek with my fingertips / I taste the void upon your lips". The first verse was inspired by the newspapers, the second by a phone conversation Springsteen had with a Washington widow. The song ends with the realization that the afterlife promised to a suicide bomber - or that travelled to by his victim - is no solace to those left behind when the bomb has wreaked its carnage.

Ever a perfectionist, Springsteen's song writing on this album was painstakingly researched. 'Into the Fire' was written after a forty minute phone conversation Springsteen had with a fireman's widow. Stacey Farrelly's husband Joe was a fire fighter with Manhattan Engine Co. 4 and, as his New York Times obituary noted, a lifelong fan of Springsteen.

Springsteen's greatest gift as a writer and a singer is the one that makes him the best rock 'n' roll singer of his era: empathy. Springsteen doesn't know what a 40-hour workweek feels like, but he knows how a 40-hour workweek makes you feel. The gift doesn't desert him on the Rising. "Trust the art, not the artist" says Springsteen regularly, but his devotees love the songs and the singer equally. Springsteen has been an active partner in a pop syllogism that's lasted several generations, playing his fans' experiences back to them over stadium speakers. He sings about people like me; he looks and dresses like me; therefore he must be a person like me! Perhaps what Springsteen means, as some of his friends suggest, is that he feels less worthy than the people he sings about. Perhaps that's why touring, communing with those who adore him (and whom he adores) is such a critical part of Springsteen's life.

'The Rising' is a better album than his last full-rock studio releases, certainly in a different league to the over-rated 'Tunnel of Love'. This record sees Springsteen back to his blue collar roots that supplied so much of his best artistic subject-matter. It takes several listens to appreciate the value of the album and Springsteen's angles on the events he's chronicling. The album wears well with listening too. A finely textured, multi-layered piece of work, you'll be dragging out new insights into the post-September 11 all-American soul with each listen. Certainly a runner for Album of the Year, the Rising is an unendingly intelligent, sincere memorial to the ordinary people whose lives were changed for ever on September 11th. Given the chance to speak for his people, we'd expect nothing less from the Boss.

Click here for a review of Bruce live in Dublin in 1999.