A review of their album 'A Common Prayer' 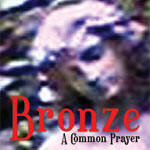 Review Snapshot:
The second album from British trio Bronze who've been attracting the attention of film director Neil Jordan, who intends to include them on his forthcoming film soundtracks.

Full review:
Firstly, a brief introduction. Bronze formed in Newcastle in 2001 and consists of Paul Handyside (vocals), Rob Tickell (bass), and Ade Evans (drums). This is the follow-up to their debut album 'The Statue In The Stone'.

'A Common Prayer' opens with 'Weight Of The Wind' and immediately demonstrates the vocal and piano playing talents of main man Handyside. 'Step Lightly' is an easy listening acoustic country ballad (not unlike Prefab Sprout's 'Cowboy Dreams') and this is followed by another ballad, the first single from the album 'Good Has Gone'. Handyside certainly has the knack for writing beautiful ballads, and 'Lonesome Touch' and 'Grey October' (my favourite track on the album) demonstrates how his song-writing has matured since his days with 80s band Hurrah, when he proclaimed 'Tell God I'm Here'.

It would be unfair to categorise him of only been capable of writing ballads. 'It Can Happen' is an up-tempo number with a catchy chorus, unison harmonies, and great guitars. The closing track 'This Paradise' is the longest song on the album and it really only comes to life in the final two minutes courtesy of Evan's fantastic drum work.

I know it's a clich?but this album is a grower and I for one believe it's the start of great things to come from this hugely underrated group. Welcome to the Bronze Age.