Review of his album 'Master and Everyone' 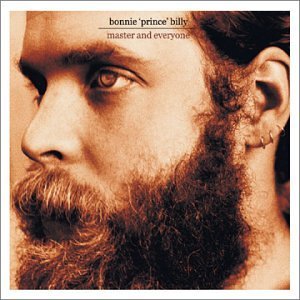 Judging even from the album cover, Will Oldham was clearly intent on creating a collection of timeless songs to hold up to the rest of the musical world on his new record 'Master and Everyone'. Under sepia hue, he appears still and defiant, and not unlike an unkempt Abraham Lincoln! Indeed, this music could have been born in any era since the acoustic guitar was invented.

It is very much more refined than most of his previous work. It's certainly a far cry from a lot of the more brash, angular, idiosyncratic music he created under the Palace monikers years ago. The songs are now maverick in their simplicity and in the purity of their release.

This is especially true of the vocals, which are restrained and considered but still pressed-to-the-glass immediate. Oldham's guitar gently hangs in the air like smoke from a cigarette, with brother Paul adding more distinct touches. Nashville queen Marty Slayton, who sounds quite like Ann Magnuson of the Walkabouts, adds her voice to a number of songs. While her presence is far from critical, she does inject much of the album with a winsome country flavour.

Long-time Oldham fans might initially be disillusioned to discover that the record isn't quite as individual as they might expect. This is most evident on opening track "The Way", which is uncannily reminiscent of Nick Drake. I fully realise that every bloke with a soft voice and an acoustic guitar is lazily compared to Drake but honestly, the resemblance here is scary.

Nevertheless, there is no denying the wistful, delicate beauty of the song, with its heartbreaking cello-enhanced chorus of "love me / the way I love you". Oldham's voice is pointed, with every gasp repressed yet breathing desire.

Patient, simple guitar and gently expressive singing mark the essence of the entire album. Two songs paired together, the title track and 'Wolf Among Wolves', are the finest examples of this modest approach. The former features softly thumbed strums beneath a gorgeous melody which is oddly plaintive despite the singer seemingly celebrating the end of a love, comparing himself to a "bird freed from its cage".

On the other hand on 'Wolf Among Wolves' he is embittered, frustrated with the subject of his affections, yet calmly asking "Why must I live and walk / Unloved as what I am". The eerie stillness of the music and voice reflects the pensive, self-critical nature of the lyric.

It's incredible how a voice and a guitar, recorded as simply as they are expressed, can move you more than all the expensive studio trickery, digital embellishment, string sections or epic electrics in the world.

Yet more sparse is "Even If Love", which is mysteriously dedicated to PJ Harvey on the sleeve. A foreboding low guitar riff and complete silence back the singer's obscure musings in equal measure, creating an intimidating atmosphere; almost threatening, but in a strangely unaggressive way.

Of the slightly more expansive tracks, "Lessons From What's Poor" and closing number "Hard Life" are the most affecting. Here the Prince's singing is more instinctive and winding, particularly on the latter, where he is arguably at his most recognisable.

The glowing highlight of the record though has to be the remarkable 'Three Questions'. The melody is grasped somewhere from the heavens; fragile, tender and utterly moving. Oldham has never been more compelling.

Love is the primary source of inspiration on the album and initially I was amazed at the underwhelming character of some of the lyrics. Perhaps I'm too used to more ornate attempts to express the idea of love and all its related emotions and intricacies. But when I heard phrases like "You tell me that there are other fish in the sea / And another gathers roses for me" ('Master and Everyone') and "I've got my problems / Sometimes love don't solve them" ('Hard Life'), I had to restrain pathetic laughter. Once the songs embed themselves however, you realise that any other words might sound sore and incongruent. These are songs written solely for the heart.

Much like Beth Gibbons and Rustin Man's recent 'Out Of Season', the album as a whole isn't quite the concrete melancholic classic you might have read that it is elsewhere. Both records contain songs that are undeniably within the realm of genius; songs that bring you to your knees, songs that will mean the world to you late some nights when the world won't listen.

An entire record of such miracles doesn't appear so often and on 'Master and Everyone' tracks like 'Maundering', 'Ain't You Wealthy, Ain't You Wise?' and 'Joy and Jubliee' don't enter this arena, though they are fine compositions in their own right.

Why some songs mean more than others remains one of the few wondrous mysteries left in life. And there's no reason why folk shan't be cherishing gems like 'The Way', 'Wolf Among Wolves' and 'Three Questions' in twenty, thirty, fifty years to come. Timeless, just as Bonnie 'Prince' Billy wishes them to be.