A review of their album 'High' 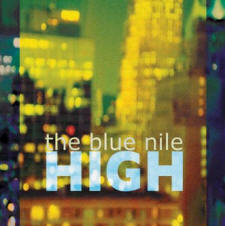 Full review:
There's a lot of old toffee written and spoken about Blue Nile's almost torturous recording process, their suffering for their art and their shared obsession with getting everything aurally just so. Reportedly they had an entire album of new material just before "High", their new collection, and "High" is of course their fourth album in 20 years. I love this band to bits but I sometimes wonder if the whole longevity thing is a smokescreen - I reckon that in and around the early 1980s the Blue Nile lads worked flat out and recorded five or six bodies of work. They then sat back and vegged. Whenever their stock rose and the crowd yelled out for more they release another masterpiece, tour, do some obtuse press interviews and then return to their bath chairs for another five years.

It's a funny hypothesis of course but even though it was recorded in the last couple of years "High" makes you wonder if it's the second disc of a double, coupled up with their debut, "Walk across the rooftops". The latter is a masterpiece, brilliantly structured, painstakingly arranged and beautifully played - check out "Tinseltown in the rain" - it's a true measure of frontman Paul Buchanan's phrasing that he can sing a line like "hey, there's a red car in the fountain" and make it sound like the most romantic thing in the world. "Walk across the rooftops" was an exercise in setting down different shades of darkness but while "High" is built along the same sombre tones it's full of colour and movement. You wonder how they make it work - the synth settings are stuck around 1983, Buchanan sounds like disappointment on legs, the lyrics are sometimes a bit drippy, all mid-life crises and lovelorn longings. But it does work for Blue Nile, and "High" really is a stunning return to form after the pretty awful "Peace at last".

For all that, High's track 3, "Broken loves" is a turkey, by the band's exalted standards - the song itself is up to scratch but they deck it out with a keyboard motif that is more irritating than edgy. It's the only blemish on the entire album - everything else on "High" is far above and beyond nearly everything else recorded this and many a year in terms of its sheer musical class. "Because of Toledo", a dustbowl ballad, could become an absolute classic but I hope it does not - no one could ever hope to top Buchanan's vocal and the song's tear-soaked arrangement. "Turn my back" is their "Every breath you take", a bona fide masterpiece and a possible single, the album's title track sails perilously close to the Lighthouse Family's wretched "Ocean Drive" but manages to avoid an ugly collision, and "Everybody else" is a jaunty little thing, Buchanan sounding almost playful. Check out the fade on the improbably titled "Soul Boy"- it's the softest sound ever recorded.