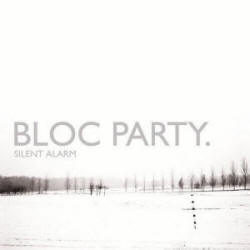 Review Snapshot:
Bloc Party are the band that everyone knows of but may never have actually heard. This, their debut effort, is a fully loaded magazine with bullets of rip-roaring effects and punk-pop edginess.

Full review:
Recorded in Sweden and produced by Paul Epworth, 'Silent Alarm' is the kind of album that alerts your attention and reveals something new with every listen. Each song thumps with a freshness that has been lacking from the majority of the newer bands currently popping up. Bloc Party's sound is big and bold, fierce and cutting.

The menacing rhythms of 'Like Eating Glass' starts it all off with the steadfast racket of 'Helicopter' following straight after. Matt Tong's drumming will instantly ensure that a surge of excitement ripples through your bloodstream while Russell Lissack's guitar and Gordon Moakes' bass will attack with a dogged resolution.

Their guitar driven punk-pop tunes bring about a welcome immediacy to their sound. Yet it is Kele Okereke who is at the heart of every biting tirade with his chief songwriting duties and distinctive lead vocals standing out. Even if some of the lyrics aren't great, it is Kele's vocals that make the songs that bit more intriguing.

The holes in Silent Alarm come in the form of poor track selection (for example quality tracks such as 'The Answer', 'Tulips' and 'This Is Not A Competition' didn't make the final track listing) and weak lyrics. If a musician is going to tackle a subject like an ongoing war, then they should offer a concerned voice, a strong opinion or a different take on all that has been previously said. They should not just base a song around chanting 'WAR, WAR, WAR' like Bloc Party do on 'Price Of Gas'. Okereke should maybe have listened to Nick Cave's 'Nature Boy' or Steve Earle's 'Rich Man's War' for inspiration before penning this tune.

But this is their debut and the fact that there are so many blistering tracks on here, all can be forgiven. 'Positive Tension' and 'Banquet' are rioting ballads while 'She's Hearing Voices' and 'So Here We Are' proves that the band can dip out of ferocious tones all while still engaging the listener. Every time you revisit this album, you are almost guaranteed to discover something new within the songs.

Silent Alarm proves that the hype around this band is justified and that there is a new band on the scene that you should be more aware of. This is a cracking first attempt from a band who will no doubt go from strength to strength.

Check out a slightly less positive review of this album.

To access a hidden track on this your CD, backtrack to about 3 minutes before the first song.