A review of their album 'Rubber Factory' 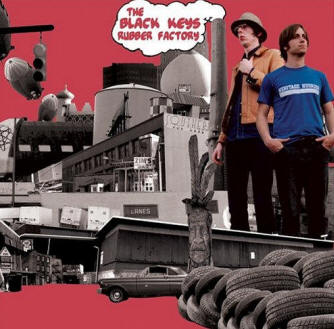 Review Snapshot:
The Black Keys might finally get some overdue attention with the release of Rubber Factory, one the year's best rock albums without a doubt. Bluesy, raw and infectious, this one mightn't leave the top of your CD pile for the next six months.

Full review:
Although their 2003 offering 'Thickfreakness' won many admirers and featured in quite a few 'album of the year' lists internationally, the Black Keys remain something of a musical oddity in this country. The blues/punk genre has been well represented in recent years with the likes of The White Stripes, the Von Bondies and the Soledad Brothers all achieving critical acclaim. However, with their new album 'Rubber Factory', perhaps the time is right for this Akron, Ohio two-piece to finally get their share of the limelight.

The Black Keys' third album gets its title from the converted rubber factory in which it was recorded. The result is one of the rawest, dirtiest sounding rock albums you are likely to hear all year. The song themes never vary too far from the blues staples of lost love, desperation and murder, but it is the fine delivery of tunes that makes the difference here. Current single "10am Automatic" is a tale of falling out of love ("What about the night that you changed / Oh from sweet, to deranged") delivered with thumping drums and screeching guitar that is sure to provoke listener hyperactivity. Lead vocalist Dan Auerbach sounds like a cross between Jimi Hendrix and Eddie Veder, particularly on the stomping "All Hands Against His Own". "Girl Is On My Mind" and "Stack Shot Billy" keep the high tempo in place, but the album is not without its lighter moments.

"The Lengths", a Beck-like ballad of lost love, pulls very effectively at the heartstrings with its lap-steel guitar plucking and emotively charged lyrics ("Tell me where you're going or what is going wrong / I felt you leaving before you'd even gone"), while the cover version of the Kinks' "Act Nice And Gentle" is a joy to behold with its country-tinged pathos. The second cover on the record, Captain Beefheart's "Grown So Ugly", is an hilarious lament about a convict returning to visit his sweetheart which would have delighted the late John Peel ("She said my man been gone since 1942 / And I tell you Mr. Ugly, he didn't look like you").

On the whole, it is difficult to find a single fault over the entire thirteen tracks. Lovers of the White Stripes et al would be well advised to check out this album, while regular rock fans will find much to delight in here. Some of the cavernous sounds on offer make it hard to believe that there is only two people actually playing, especially on "Aeroplane Blues" and the emphatic closing track, "'Till I Get My Way".

One criticism directed at The Black Keys in their native Ohio is that they both were raised in comfortable suburban environments, and cannot truly claim the blues as their own. Well, you try cleaning the algae from an Olympic sized swimming pool on a balmy summer's day without getting some form of the blues!

There is enough on Rubber Factory to arouse interest after the first listen, and it only gets better with repeated play. Don't be surprised to see this record making several end of year Top 10 album lists - it's a joy from start to finish, with hardly a weak track on it.