Review of their album 'Passionoia' 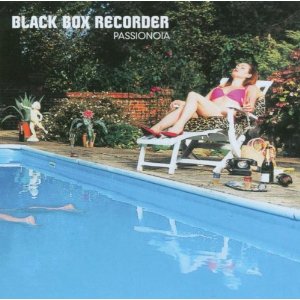 "Passionoia" is Black Box Recorder's uneven follow up to their second album, "Facts of Life", a must buy pop classic. Black Box Recorder are a three piece comprising Luke Haines, the Auteurs' sulphurous frontman and pop subversive, John Moore, formerly of the Jesus and Mary Chain, and Moore's wife, the sassy sweet toned Sarah Nixey. "Facts of Life" fringed the charts in the late nineties and featured some gorgeously simple songs. These were decked out with sparse synths and perfectly pared down arrangements, and topped off with the sublime wonder that is the voice of the breathy and delectable Sarah Nixey. Sarah sighs her way through life, she's a trained actress with a cut glass tone and she makes Kate Bush sound like a demented Janis Joplin. Nixey does not so much sing lyrics as fellate them. Songs like "Sex life", "Friday night/Saturday morning" and the album's title track are testaments to the trials, traumas and titillations inherent in sins of the flesh. Black Box Recorder's "May Queen" must be the most perfect and least sentimental portrayal of young fumbling love ever put on vinyl.

One of the highlights of "Facts of Life" was "Straight life", a brilliant take on the soulnessness of chintzy English suburbia. Passionoia's "British Racing Green" takes us on an acidic trawl through the same territory. Over an arrangement loosely based on the Fab Four's "Day in the Life" Sarah muses on insurance claims, cottages by the sea, gin, satellite dishes, early retirement, and boxes of chocolates. By the time a choppy middle 8 rolls around Sarah is musing about driving around in a sports car, "top down/inclement weather". On paper it's implausibly humdrum stuff decked out in stilted Ealing comedy Queen's English but the naughty Nixey makes this suburban detritus sound like saucy top shelf material. "These are the things" is the album's obvious single and has a cheesy eighties synth backing track, a dance around yer handbags chorus and a lyric that reflects on the stuff and nonsense that fills our noughties lives.

"School song" and "Andrew Ridgeley", a slightly overlong tribute to the Wham himbo, are relatively reasonable, with Sarah respectively donning a headmistress uniform and latterly gushing about the talentless Andrew as he moves into traffic in his convertible Golf GTI. "Passionoia" tails away slightly with the rather listless "Girls' guide for the modern diva", and "I ran all the way home" (a darkly psychotic reprise of Morrissey's "Every day is just like Sunday"). However "the new Diana" is a breathtaking piece of uneasy listening, representing Black Box Recorder's lyrical and musical highpoint thus far. Somehow straddling mordancy and mischief, with a Greensleeves-like melody and mock courtly tone, "New Diana" is a calculated put down of the deification of the Queen of Hearts and a cruel puncturing of the cult of personality. Glorying in her new role, Sarah lounges on a yacht reading photo magazines, and in a prozac-ridden tone reeking of condescension she croons about "visiting the shore?occasionally".

Iconoclasm at its best, and testament to how great pop music can be.