A review of their album 'Hot Shots II' 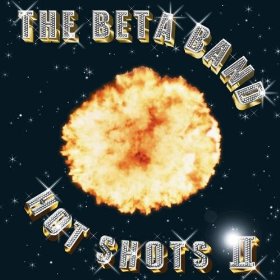 Let's get one thing out in the open first. I like The Beta Band. A lot. As far as I can make out these four boys are a few lengths clear in the originality stakes. As rare as hen's teeth, they appear to be a band striving to create something new, something unique, for us. They're a band with buckets of innovation.

1999's "The Three EPs" was a joyful introduction to The Beta's cosmos, a strange brew of folk-whimsy, psych-weirdness and, hold on here, hip-hop. Their sound was full of mystique, intrigue and a very real sense of a band limbering up for much, much more to come. Unfortunately the self-titled debut album that followed was generally regarded as directionless and unfocused and, bar a couple of extraordinary tracks, the album did present itself as a kedgeree of red herrings and stoner designed cul-de-sacs that replaced intrigue with confusion. Refreshingly the band themselves denounced it but it was disappointing and it bugged the shit out of me.

Hot Shots II however is bang on the money. Whilst not losing the charm of previous releases' dreamy meanderings, they've pulled back the reins and delivered a thing of polish and control. Credit here must partly go to R&B producer Colin Emmanuelle (a.k.a. C-Swing) who was invited by the band to participate and the results of this synthesis are superb. Openers "Squares" and "All Sharp" announce in that monstrous dub reggae beats and bass lines are the order of the day, whilst high above Steve Mason's familiar monkoid mantras soar and glide hypnotically. "Quiet", a gargantuan tune, sees Syd Barret resurrected and armed with a rhythm section of Zulu Dawn style, back off whitey, tribal menace. C-Swing's touch is stamped all over this album with big-sound clarity and a light and space that allows us to clearly see the preciseness, intricacy and beauty of their work. While the bass heavy grooves keep you planted on good old Gaia, your head is free to be led upstairs for a multicoloured going over. "Gone" is pure silk lullaby.

"Broke" reveals itself to be a snarling dancehall stomper that, stripped of Mason's "more tea vicar?" vocals, could be slipped into a Brixton basement set at 2.00am and not result in somebody smoking the dj. The diversity of influences is vast, the extremes of black and white musical culture fuse seamlessly to produce a spectacular sound.

But, let's carp a little. There does seem to almost be a reluctance here to allow full reign to their hairy, sandal-freak tendencies and the result could be accused of being a tad too easy listening. In all honesty though, these are minor qualms. More importantly it's apparent that The Beta Band are riding their learning curve at a "bends" inducing velocity and God knows just how far ahead of the rest they could go. As such they should be applauded and encouraged. Go give them some money.

Betty Blowtorch's 'Are You Man Enough?' is released on Foodchain Records