A review of his live album called, er, 'Live' 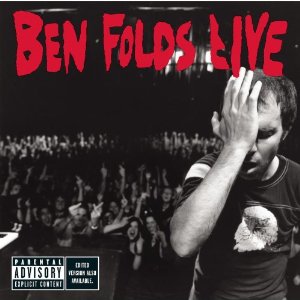 This was a CD I had been looking forward to for a long time. A big fan of Ben Folds Five I, like many other fans, was concerned about the effect on the music when they split and Ben went solo. I should not have worried. His 2001 solo album "Rockin' The Suburbs" carried on the tradition of mixing emotional thoughtful songs with more upbeat lively tracks.

Perhaps this Live album is a stopgap to keep fans happy while the next record could be produced. Or maybe this album is being released because of the phenomenal reviews of his recent live shows. Whatever the reason, I don't particularly care. This is quite simply one of the most entertaining albums you are likely to hear this year. Like his recent shows, the album comprises of just Ben and the piano. No backing band, no special effects. Just a piano and a microphone. Therefore the fact that the listener's attention can be held for all 17 songs is an amazing feat.

Opening track "One Angry Dwarf and 200 Solemn Faces" from the 1997 album 'Whatever And Ever Amen' sets the tone for the rest of the CD. The recipe of humour, 'geeky/loser' lyrics, violent piano onslaughts and gentle soft tinkering tunes, adds up to an unbeatable combination. Mirroring his live shows, this album is a complete reflection of all of Ben Folds career, from his early band days right up to his recent solo effort. Although the track listing is chronologically mixed up with old songs and new songs following each other, the album still flows very well.

When recording live albums, it is notoriously difficult to capture the real concert atmosphere while still remaining a high quality recording. The Beach Boys 'Live From Knebworth' album springs to mind as an example of a poorly recorded and mixed album. Thankfully an astounding job has been done here and the mixing by Ben Folds and Marc Chevalier has to be commended. The audience are audible throughout but not in such a way as to spoil the audio quality.

Just like the 1997 Ben Folds Five rarities & live album 'Naked Baby Photos" this CD contains a spontaneous ditty inspired by an audience member's repeated hollering of "Rock This Bitch!" On some albums, this type of track can be quite intrusive when stuck in the middle of the "real" songs. But it's not the case here. It is short, funny and in style with the entertaining, often spontaneous, nature of his shows.

Track 13 sees Ben take on the Elton John masterpiece "Tiny Dancer", which has gone through a resurgence in popularity since the Cameron Crowe film "Almost Famous" was released. As you might expect, Ben tackles this song with the grace and respect that it deserves.

If you are lucky enough to pick up the limited edition version you will also get a bonus Seven track DVD (six songs and one humorous segment showing how the albums artwork was achieved). And here is where I found my only complaint. Track Seven on the DVD is a reworking of the classic "Song For The Dumped". Instead of the raucous wild version that appeared on 'Whatever and Ever Amen', this is a quiet, meandering and extremely funny version that begs for the viewer to sing along with. My complaint is that this was not on the album - how they made the decision to leave it off, I will never understand!

But, with this single criticism aside, this is a truly marvellous, fun, touching and above all entertaining album that should be on everybody's list of albums to buy.