A review of their album 'Dear Catastrophe Waitress' 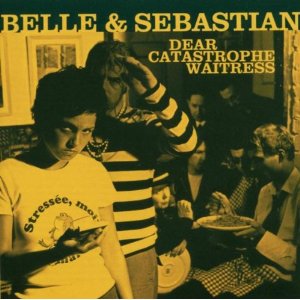 Belle & Sebastian are one of those musically literate and adventurous groups which have achieved cult status in France. The French like their music with an intelligent, pseudo-intellectual twist, hence the enormous popularity of Joy Division, Muse and Irishman Perry Blake on French playlists.

The soccer team-sized Scottish group is large in its size as it is in its ambition and commitment. The effect of its oeuvre has been patchy however. Exhilarating in its live performances, the group has dallied in other cross-band collaborations, working at times with members of Irish fellow travellers the Frames.

Taking a brave step to rediscover its significance, Belle & Sebastian hired Tatu producer Trevor Horn to produce their latest work. The title chosen for the CD is as literary-eclectic as ever and the album sleeve fits with previous Belle & Sebastian obscure lit-art statements. But what s inside has changed noticeably from predecessing albums. 'Step Into My Office, Baby' is a lovely opener, Stuart Murdoch's croon is fragile but with a lush, gorgeous quality. The vocals are set amid some swirling and bubbling brass, jangly guitars and wonderful tempo shifts. The brass and strings swirl and swoon throughout the recording, but the plot remains tight throughout, Trevor Horn's old-hand production experience making its presence felt.

'Piazza', 'New York Catcher' has Murdoch all alone with acoustic guitar, doing what he does best, telling whacky little stories. On the next track he hands lead vocals over to Isobel Campbell. That's a good idea: 'Asleep On a Sunbeam' is less adorned than the other tracks but lends the album some balance and a little female aggression that is a break from Murdoch's smooth and earnest call. Track nine 'Lord Anthony' could be autobiographical: telling a story of schoolyard bullying Murdoch's voice tracked with a lonely harmonica is plaintive. Take it in the guts. It can't get any worse.

Lead singer and rumoured control freak Murdoch wrote on the band's website that he and his band mates had more fun in making Dear Catastrophe Waitress than they've had in any of their albums since Tigermilk, the group's most acclaimed recording. Certainly the recording is happier, livelier, and more coherent but also more commercial than anything the band has recorded before. But that s what Horn does best - he's done it before with wilting groups like the Pet Shop Boys and it s a logical move for a floundering group to produce their strongest studio stint in seven years. And not everything has changed: their wit, silliness, playful melodies, and chamber pop sensibilities endure. Horn's most valuable contribution was probably throwing out the band's preciously lo-fi sound and feeding the band to the lions of studio volume buttons. Sounds like he gave them all a good shake too.

An orchestra of instruments went into this album. For quality and effort, for Stuart Murdoch and for hiring Trevor Horn, it's worth all of its price tag.

Click here for a review of Belle & Sebastian live in Dublin in 1999.